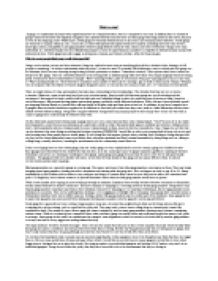 What is a gang?

﻿What is a gang? A gang is a combination of people who regard themselves as a family therefore, who are committed as one unit. In addition there is all kind of gang to intend to break the law regularly using their inacceptable behavior and also there are other gangs who hang around in the streets, the park or even at the shopping centre. Furthermore, Youth gangs are variously defined in the social science and criminal justice literature. Youth gangs are bound by a common ethnicity, race, social class, or other determinant and employ distinctive symbols, including style and color of dress, hand signs, tattoos, and graffiti. Loyal gang members follow a gang-defined system of rules, rituals, and codes of behavior. Gangs serve some individuals as a substitute family structure. Membership imparts a sense of empowerment as members act together to defend territory and provide mutual protection. Youth gangs typically engage in delinquent, criminal, and violent activities, often for financial gain. Why do many people find gangs really disrespectful? Gangs can be violent, vicious and also vehement. Gangs are violent because using or involving physical force intends to hurt, damage, or kill people or something: ?A violent confrontation with riot police?, vicious because it?s probably like deliberately cruel or violent and also gangs can be vehement, this is because showing strong feeling; forceful, passionate or intense: ?vehement criticism?. Those phrases that I have chosen are likely to be like gangs. They are a dreadful influence to the young public in addition gangs often have their own unique language which the young public would not be able to understand for example: ?Bruv? meaning brother, mate or even friend, ?Jam man? meaning take it easy or stay calm or ?Fam? meaning family etc. ...read more.

Here are some predictions of mine and many others which I would like to now inform you: many gangsters would like to wear either baggy trouser, designer hats or an attractive hoody. Dressing up matters to an individual gangster and looking ?all it? matters very much to an individual gangster. Gangs do not follow the policy that they have been told to do in the environment that they are living in. This is because, the more attractive they all look will effect in the public as they add on more look which will then make it habit for the younger?s to do the same. The stylish way of spreading their sense of clothing may lead to theft if the clothing is expensive to afford and also sustain. This gang member is probably the oldest in the posse and likely has the smallest criminal record and they often have the power to direct the gang?s activity, whether they are involved or not. In many jurisdictions, this person is likely a prison gang member calling the shots from within the prison system or is on parole. Often, they distance themselves from the street gang activities and make attempts to appear legitimate, possibly operating a business that they run as fronts for the gang?s drug dealing or other illegal operations. Here are some facts about gangs that I would like to now share with you now. They are: Gangs can be organized around race or ethnic group, money-making activities or territories, gangs usually claim a particular area of town which they call their "turf", they spend much of their time fighting rival gangs to keep them out of this territory, most gang ...read more.

These gangs obviously require members to have been in prison at one time, and are particularly tough and brutal. One gang expert wrote, "Putting young gang members in prison is like sending them to criminal college" Many people involve other people who have gone through and seen a lot in life, this is because most of the people have given on life and are relying on the street life. Therefore here are some tips from staying away from gangs: Do not hang out with people who are in gangs or accept gang members as your friends, make new friends who are not gang members, involve yourself with extracurricular school activities, church activities, sports, or other interests that help you make new friends and keep you out of trouble, say "NO, thanks," to any activity with gang membership, even a date or a party, know your neighborhood, your community, your school surroundings, especially when and where gangs are known to hang out. And, stay away from any place or neighborhood that is known to be a gang territory, avoid gossip about gangs. What you say, even if you didn?t mean it, may get back to a gang member, refuse to go along and if pressured to join a gang, talk to your parents, school counselor, coach or other trusted adult. By refusing to go along, you take some power away from the gang and also if you want a change to avoid gangs, talk to your parents about moving to a different neighborhood or school and tell them the reason. So the next time you see gang?s I suggest you to keep away from these dangerous people as any second they could attack you, hurt you or even take your life away from you. ...read more.