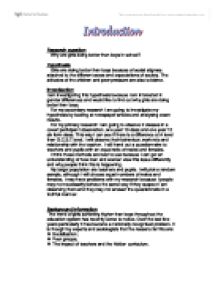 Why are girls doing better than boys in school?

Research question Why are girls doing better than boys in school? Hypothesis Girls are doing better than boys because of social stigmas attached to the different sexes and expectations of society. The attitudes of the children and peer pressure are also to blame. Investigation I am investigating this hypothesis because I am interested in gender differences and would like to find out why girls are doing better than boys. For my secondary research I am going to investigate my hypothesis by looking at newspaper articles and analysing exam results. For my primary research I am going to observe 2 classes in a covert participant observation, one year 10 class and one year 12 six form class. This way I can see if there is a difference at A level than G.C.S.E level. I will observe their behaviour, work rate and relationship with the teacher. I will hand out a questionnaire to teachers and pupils with an equal ratio of males and females. I think these methods are best to use because I can get an understanding of how men and women view this issue differently and why people think this is happening. My target population are teachers and pupils. I will pick a random sample, although I will choose equal numbers of males and females. ...read more.

Perhaps this means those although girls are doing better overall, boys are achieving higher grades in certain subjects such as maths. The national statistics show a very similar overall pattern in the results, showing that this is a national problem and not just regional. Newspaper articles All of the articles are in agreement that girls are achieving higher grades than boys in exams at the moment. They are all quite statistical and give a lot of facts, which means they are more likely to be based on truth. Although I would say that they exaggerate the situation, probably to make it seem more interesting to the public. It is definitely evidence that girls are doing better than boys, but none of the articles really looks at why girls are doing better. The 'Insights' article, however, contains a section explaining why boys are under achieving and goes into a lot more detail. The research of these ideas was done by ' Harris et al', a sociological researcher. Summary of secondary data I am pleased with the evidence I have found and they show that my hypothesis is true. I think the exam results are reliable to the extent of showing how children achieve in exams but cannot be used as an example of the way children work in the classroom. ...read more.

> 85% of the girls went on to do the extension paper, only 50% of the boys did it. When the boys were chatting most of the time it was for fairly long bursts and work was completely stopped while the conversation went on. The girls on the other hand seemed to mainly talk in short quick converse and managed to talk whilst working. The teacher informed me that one girl had asked her for additional work and information on 'domestic violence'. There was a period around the middle of the lesson where the whole class reached its peak in levels of talking and the teacher had to calm the class down to a decent level again. The boys adapted back to this much slower than the girls did and seemed to find it difficult to adjust back so quickly. Summary I observed some useful patterns through my observations. However I encountered a few problems such as the pupils may have acted differently while I was observing them and this might have disrupted patterns that normally occur. I could have maybe interviewed the teacher about her observations of the class and have got another opinion on the behaviour of the class. I could have perhaps looked at the attendance rates of boys and girls throughout the school and in different subjects to give me an idea of how committed pupils are to their education. ...read more.