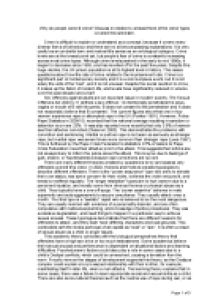 Why do people commit crime?

﻿Why do people commit crime? Discuss in relation to at least three of the crime types covered this semester. Crime is difficult to explain or understand as a concept, because it covers many diverse forms of behaviour and there are no all-encompassing explanations. It is only useful as an umbrella term and makes little sense as an ontological category. Crime levels are at the lowest point yet, but people?s fear of crime is constantly increasing across most crime types. Although crime levels peaked in the early to mid 1990s, it began to decrease since 1995, and has levelled off in the past few years. Despite this huge decline, the UK prison population is at its highest level in history. This raises questions about how the rate of crime relates to the imprisonment rate. Crime is a significant part of contemporary society and it is a commonplace event, but it is not solely the acts of the ?bad?, and it is not unusual. Despite the social reaction to crime, it makes up the fabric of modern life, and levels have significantly reduced in volume over the past decade and a half. s*x offences against adults are an important issue in modern society. The s****l Offences Act 2003 s.11 defines a s*x offence: ?A intentionally penetrates the a**s, v****a or mouth of B with his p***s. B does not consent to the penetration and A does not reasonably believe that B consents?. ...read more.

between adults who are or have been intimate partners or family members, regardless of gender or sexuality?. There is no specific offence of domestic violence under criminal law, but many forms of domestic violence are crimes, such as assault, criminal damage, harassment, r**e, and attempted murder. It is difficult to measure the extent of the crime due to the focus on individual incidents in the media, and attrition in the criminal justice system. This gives a common public perception of domestic violence as one-off incidents, when in fact it has a cyclical and ongoing nature. On average, 35 assaults take place before the police are called, and every year there are 13 million incidents of physical violence or threats of violence against women from their partners of former partners. One of the major issues with the crime is repeat victimisation. In 2007, of those who reported domestic violence, most experienced repeated abuse, and 9% were abused over twenty times that year. Perpetrators use a variety of tactics such as minimisation, justification and victim-blaming to gain control over them and maintain it. They will use isolation, coercion, threats and intimidation. The offender exercises authority over the victim after they have challenged the perpetrator?s decisions. The attacker will control their partner?s routines, childcare practices and family finances, and question their loyalty. Women are just as likely to initiate violence as men (Stets and Strauss, 1990), which illustrates symmetry in terms of gender. ...read more.

There is a lack of specialised expertise and training in this area of law, and police are ill-equipped organisationally and occupationally to monitor cases on the internet. There has also been a consistent increase in hate speech, child p*********y and other offensive content. The internet has provided a new frontier for global subcultures and due to the peripatetic nature of websites, the quantification and regulation is extremely difficult. It provides an anonymous space for behaviour that would otherwise take place in non-virtual contexts. Filtering, internet service provider self-regulation and education about cybercrime has helped put some safeguards in place to prevent the viewing of offensive material and the protection of personal data, but it is still extremely difficult to harmonise national laws and cooperate in the prosecution of the widespread crimes. In conclusion, there are a variety of reasons for people committing particular crimes and academic views of criminality often differ from popular, stereotypical views of the offender?s characteristics and motives. Those convicted of r**e or s*x offenders can have different economic and social backgrounds or learning difficulties, both of which affect the person?s development and social skills. Cyber crime is often committed due to ideological motives or simply a belief in the free-flow of information. Academic theories illustrate that there are no all-encompassing definitions or explanations of crime; this is the antithesis to the media portrayal of crime. All three crime types cover many forms of behaviour and thus make little sense as ontological categories. They are too broad to be of any use in explaining individual situations and circumstances. Word count: 2002 Page of ...read more.