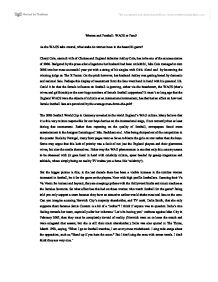 Women and Football: WAGS or Fans? As the WAGS take control, what stake do women have in the beautiful game? Cheryl Cole, staunch wife of Chelsea and England defender Ashley Cole, has to be one of the success stories of 2008. Badgered by the press after allegations her husband had been unfaithful, Mrs Cole managed to turn 2008 into her most successful year yet with a string of hit singles with Girls Aloud and by becoming the winning judge on The X Factor. On the pitch however, her husband Ashley was getting booed by domestic and national fans. Perhaps this display of resentment from the fans went hand in hand with his personal life. Could it be that the female influence on football is growing, either via the boardroom, the WAGS (that's wives and girlfriends) or the now huge numbers of female football supporters? It wasn't so long ago that the England WAGS were the objects of ridicule at an international tournament, has that had an affect on how real female football fans are perceived by the average man-down-the-pub? The 2006 football World Cup in Germany revealed to the world England's WAG culture. Many believe that it is this very culture responsible for our boys demise on the international stage, if not currently then at least during that tournament. ...read more.

But, as far as I'm concerned, and I believe it to be the case for many women like me, any man who decides not to talk to me bout football is denying themselves a decent debate, which is all part of the fun with being a sports fan. It savours very slightly of 2006 Luton Town manager, Mike Newell, who after a match against QPR criticised female assistant referee Amy Rayner using s****t comments. Although he apologised he was reprimanded by the club, who clearly wanted to distance themselves from the incident. Criticism is fair enough, but s****t remarks are just the gateway to trouble. Another fine, yet possibly controversial example of an influential woman in football, is Karren Brady. In 1993 she was appointed as the managing director of Birmingham City (despite being an Arsenal supporter) and in 2002 was the first woman to hold the position in the top flight. She married Paul Peschisolido who played for Birmingham for two seasons (92/93 and 93/94), so does this mean even women involved in the finances of football have ulterior motives? The evidence suggests not as her involvement with the club was a business venture with one of her old clients from when she worked for Saatchi & Saatchi advertising agency, and nothing to do with a romance with the player. ...read more.

This idea for a feature came to me after I became involved in a rather heated argument with a man at my local pub, he refused to talk to me about football because I was a girl. The incident initially irritated me, but afterwards I saw the humour behind it and became interested in what affect women have had on football and what opinions men may have towards it. I hope the issues raised, and I haven't been unfairly critical to one specific s*x, will create a debate amongst readers, as I am certain there are increasing numbers of female reader to your magazine. This is in no ways a feminist article, no strong opinions are being enforced, I have left sufficient room for the readers own opinion to be formed. I have made it tongue in cheek at parts as to appeal to both sexes. I have thoroughly researched all the aspects of the feature and have made no assumptions or said anything out of line that could get the magazine or myself into trouble. Even if the article should not appeal to some readers, hopefully that will ignite an interest in the magazine for forthcoming issues as people continue to debate the points raised. Furthermore I believe the article to be an interesting read, perhaps even educational. The feature is 1432 words long, including title. ...read more.