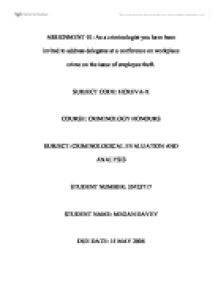 Workplace crime, white-collar crime, crime against business all fall under the same category, no matter what term you use to describe it, this type of crime costs South African Businesses roughly R40 billion per year

ASSIGNMENT 01: As a criminologist you have been invited to address delegates at a conference on workplace crime on the issue of employee theft. SUBJECT CODE: HCREVA-X COURSE: CRIMINOLOGY HONOURS SUBJECT: CRIMINOLOGICAL EVALUATION AND ANALYSIS STUDENT NUMBER: 35425717 STUDENT NAME: MEGAN DAVEY DUE DATE: 15 MAY 2006 TABLE OF CONTENTS Page 1. INTRODUCTION 1 2. THE WHAT, WHY AND WHERE OF WORKLACE CRIME 2 2.1 WHAT: What types of crimes comprise crimes in the workplace? 2 2.2 WHY: Why do some companies fall prey to workplace crime and Why do some employees commit workplace crimes? 3 2.3 WHERE: Where does workplace crime occur? 4 3. THE SIGNS: What to look out for in employees that may indicate they Are committing workplace crimes 5 4. DETERANCE AND DEFENCES AGAINST WORKPLACE CRIME 6 4.1 Pre-employment 6 4.2 Eliminating Opportunity 7 4.3 Preventing Employee Theft 8 Bibliography 1. INTRODUCTION: Workplace crime, white-collar crime, crime against business all fall under the same category, no matter what term you use to describe it, this type of crime costs South African Businesses roughly R40 billion per year. The exact cost of workplace crimes are even harder to uncover due to a large lack of reporting these crimes to the Police. KPMG conducted a Fraud Awareness survey and found 20% of respondents reported detected fraud, therefore 80% of detected fraud went unreported and this does not include undetected fraud, (Griffiths, 2004) ...read more.

"KPMG's fraud awareness survey revealed that fraud occurred mostly because of poor internal controls, as well as collusion between employees and a third party" Griffiths, 2004. These poor internal controls exist in so many companies big and small, but research has shown that workplace crime in smaller businesses is more common. Often companies may give off the impression that theft or fraud will go unpunished, it is not spoken about or a company may have unwitedly created a norm where certain type of behaviour and certain unethical practices are just accepted. Also it is found that few employees who steal from work regard it as theft. Many believe it was 'owed' to them by the company, they may legitimize their stealing with rationalization like "I worked 10 hours overtime last month and this is my compensation" often seeing their theft as a "well deserved perk". There have been variables identified that relate to dishonesty and theft (adapted from Table 4.1 HCREVA-X Tutorial501/2006), they include: Unreliability, some people are irresponsible and careless by nature and often don't care about the good of the company. Employees who have problems socialising often have underdeveloped values, employees who have problem with authority relationships and have difficulty conforming to a companies values may steal. Individuals who seek excitement may steal. Employees with low levels of work motivation may become frustrated or bored and steal to alleviate this frustration. ...read more.

3. THE SIGNS: What to look out for in employees that may indicate they are committing workplace crimes. In 90% of the cases in which people steal from their companies, the employer would probably have described that person, right up to the time the crime was discovered, as a trusted employee (Gray, 1997). There are signs to look out for in trying to detect workplace crime, but one should be aware that these 'signs' do not produce 'conclusive' proof and a more thorough investigation needs to be done, otherwise a company may find themselves in a very costly lawsuit. Employers, if suspecting workplace crime is taking place should be on the lookout for employees that show a sudden and unexplained rise in standard of living. Such as buying property, a new car an employee would not afford on their salary alone, extravagant vacations and expensive clothes or jewelry. Employees who do not take time off work may be suspicious too as they fear in their absence their embezzlement or fraud may be uncovered. Similarly employees who insist on handling everything on their own and taking on jobs that are not required of them, such as filing their own receipts. 4. DETERANCE AND DEFENCES AGAINST WORKPLACE CRIME 4.1 Pre-employment When it comes to hiring a potential employee a few simple background checks may go a log way in hiring an honest person. Call law enforcement to conduct a background check with regards to any prior offences. ...read more.