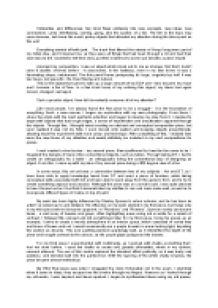 ﻿Similarities and Differences. My mind flows endlessly into new concepts, new ideas, new connections. Lines interflowing, coming, going, Like the spokes of a fan. The link to the topic may seem tenuous, but it was the small, quirky objects that attracted my attention during the time spent on this unit. Everything started off with junk... The trash that littered the streets of Hong Kong were part of my initial idea, and it inspired me, as they were all things that had been through a lot and had their own story to tell. I wanted to tell their story, put their existence to some use besides a piece of junk. Amongst my composition, I saw an object which stood out to me as strange. Not that I hadn?t seen it dozens of times before - in classrooms, in the hallways, even in my own home. It was a fascinating shape, unbalanced. The thin pencil frame juxtaposing it?s large, ungainly top half. ...read more.

In some ways, this art unit was a connection between two of my subjects - Art and DT, as I have been able to apply knowledge learnt from DT and used a piece of furniture, while taking conceptual skills associated with Art and been able to work away from the generic form, and to try to create something atypical and peculiar. Although the piece was on a small scale, I was quite pleased to how it turned out as I feel that it demonstrated my abilities to mix and mark-make well, as well as to incorporate different types of media on top of paint. My work has been highly influenced by Stanley Spencer?s colour scheme, and he has been an artist I?ve looked up to and idolized. His influence on my work started in my first piece, but it was only in my third piece where it became apparent. In ?Plumbers? and ?Riveters?, Spencer mainly used warm tones - a vast array of browns and greys, often highlighting areas using red or white for a splash of contrast. ...read more.

I used elements I was knowledgeable about, the fans, the interior, the different types of media. Throughout this Exam Unit, my work on Similarities and Differences has evolved in a way I could have never imagined. But never the less this topic has been amazing. It pushed me to trying new things, quirky things, things out of my comfort zone. I tried new media that I have barely thought of, chalk, I?ve always imagined it to be crumbly and difficult, I was right. But I learned to make it work something I would have refused to use in my early stages. Although still room for improvement, I believe I have handled myself well in the exam. Stress and Fret was always my enemy when it came to exams, however this time round, I managed to keep my cool and carry on, I took regular breaks and often stopped to look before I make drastic modifications. My work on Similarity and Differences has definitely changed from being to end, the pieces are all connected, yet they are all unique. From concept to reality, what a ride. ...read more.