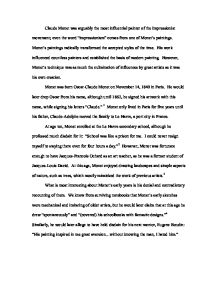 Claude Monet was arguably the most influential painter of the Impressionist movement; even the word &quot;impressionism&quot; comes from one of Monet's

Claude Monet was arguably the most influential painter of the Impressionist movement; even the word "impressionism" comes from one of Monet's paintings. Monet's paintings radically transformed the accepted styles of the time. His work influenced countless painters and established the basis of modern painting. However, Monet's technique was as much the culmination of influences by great artists as it was his own creation. Monet was born Oscar-Claude Monet on November 14, 1840 in Paris. He would later drop Oscar from his name, although until 1862, he signed his artwork with this name, while signing his letters "Claude." 1 Monet only lived in Paris for five years until his father, Claude-Adolphe moved the family to Le Havre, a port city in France. At age ten, Monet enrolled at the Le Havre secondary school, although he professed much disdain for it: "School was like a prison for me. I could never resign myself to staying there even for four hours a day."2 However, Monet was fortunate enough to have Jacques-Francois Ochard as an art teacher, as he was a former student of Jacques-Louis David. At this age, Monet enjoyed drawing landscapes and simple aspects of nature, such as trees, which mostly mimicked the work of previous artists.3 What is most interesting about Monet's early years is his denial and contradictory recounting of them. ...read more.

Eventually though, financial pressure from his parents10 prompted him to submit two canvases to the Salon in 1865. Both were accepted and received enormous praise. Following this success, Monet embarked on a grand painting titled, Le Dejeuner sur l'Herbe. This was to be based on Edouard Manet's painting Le Bain (he later changed the title to Le Dejeuner sur l'Herbe; which, exhibited 1863 at the Salon des Refuses (the exhibition for all the Salon rejects) great controversy because of its "immoral" content11. The painting was also departure from previous styles, because of its unhidden brushstrokes, an element of impressionism. Monet did not finish his more straightforward, simple version by the deadline of the 1866 Salon and instead rushed a portrait of his future wife, Camille-Leonie Doncieux, which was accepted, and again highly praised. For reasons known only to him, Monet never would finish Le Dejeneur sur l'Herbe. For financial reasons, Monet was forced to return home to Le Havre in 1867. He would soon return to Paris, though, and settle in 1869 at Bougival, where he often painted with Renoir. The two had great influence on each other's paintings during this period and Renoir himself admitted that if they were not signed, he would have ...read more.