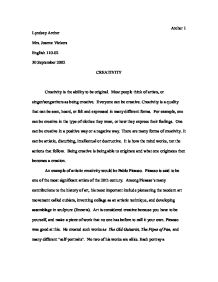 Creativity is the ability to be original.

Archer 1 Lyndsey Archer Mrs. Joanne Vickers English 110-02 30 September 2002 CREATIVITY Creativity is the ability to be original. Most people think of artists, or singer/songwriters as being creative. Everyone can be creative. Creativity is a quality that can be seen, heard, or felt and expressed in many different forms. For example, one can be creative in the type of clothes they wear, or how they express their feelings. One can be creative in a positive way or a negative way. There are many forms of creativity. It can be artistic, disturbing, intellectual or destructive. It is how the mind works, not the actions that follow. Being creative is being able to originate and what one originates then becomes a creation. An example of artistic creativity would be Pablo Picasso. Picasso is said to be one of the most significant artists of the 20th century. Among Picasso's many contributions to the history of art, his most important include pioneering the modern art movement called cubism, inventing collage as an artistic technique, and developing assemblage in sculpture (Encarta). Art is considered creative because you have to be yourself, and make a piece of work that no one has before to call it your own. ...read more.

Red shoelaces and the occasional Confederate flag patch were the only departure from the Archer 3 dark theme. These two boys set themselves apart from the other kids and by this were creating a way of life for themselves. Some may believe what they did was wrong, and I agree, but one can't deny the creativity that went into the shooting and the way of life for these boys. Thomas Edison is known as a creative genius. He has over 1000 patents for inventions, in which people still use today. Such as, the incandescent light bulb, the motion picture camera and idea for producing synthetic carbolic acid. From his inventions he earned the nickname "The Wizard of Menlo Park". When Edison was born, society still thought of electricity as a novelty. By the time he died, entire cities were lit by electricity. In school, Edison's teachers considered him a dull student because he had a hearing problem and could not follow the lesson. His mother could not take the smell of his laboratory and so he got a job and the railroad and created a lab in an old railway car. ...read more.

He called his followers his "family" and at points there were hundreds of them. Many theories have evolved concerning Charles Manson such as the Beatles White Album sent him clues and massages to carry out these horrific genocides. Another theory is that Manson modeled himself after Adolph Hitler. Charles Manson created the ideas for the murders. The victims were merely part of his creation. Though his actions were negative, they had creativity and originality. His "family" was acknowledging his feelings about his life. A life he created, for himself. Originality is a major part of being creative. Creativity is not always popular. It comes in many shapes and sizes. No matter if it is a mass-murder or an abstract painting in a museum. It can be expressed through sight, sound, or feeling. Creative people do Archer 5 not have to be smart, popular or even sane. All they must do is use their imagination and express it. Creativity can be disturbing, intellectual, artistic or destructive. It is not about the action proceeding, but the initial thought process. Using ideas and putting them toward a conclusion is creativity. Creativity is an ability to be original on a personal level. The workings of the mind produce creativeness, but it is how they are expressed that one might view a creation. ...read more.