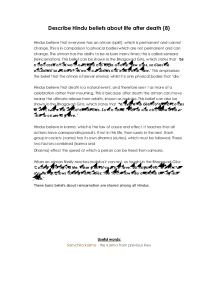 Describe Hindu beliefs about life after death (8) Hindus believe that everyone has an atman (spirit), which is permanent and cannot change. This is in comparison to physical bodies which are not permanent and can change. The atman has the ability to be reborn many times; this is called samsara (reincarnation). This belief can be shown in the Bhagavad Gita, which states that 'as a man casts off his worn-out cloths and takes on other new ones, so does the embodied soul cast off his worn-out bodies and enters other new.' This emphasises the belief that the atman is forever eternal, whilst it is only physical bodies that 'die.' Hindus believe that death is a natural event, and therefore see it as more of a celebration rather than mourning. This is because after death the atman can move nearer the ultimate release from rebirth, known as moksha. ...read more.

These basic beliefs about reincarnation are shared among all Hindus. Useful words: Samchita karma - the karma from previous lives Paapa - sinful actions in the past; these can cause suffering Agami karma - the actions which are performed in the present life and which go on to affect the future. Explain how a Hindu funeral might help and comfort the relatives of someone who has died. (7) Hindu funerals are seen as celebration and gain rather than a loss. This is because Hindus believe that the deceased is now one step closer to achieving moksha, the ultimate release of rebirth. This is shown in Hindu funerals in many ways. Firstly, Hindus are cremated after death, this helps release the atman (soul) from the body. This element would comfort a relative, as it would assure them that the deceased has progressed to the next step in the cycle, and is now closer to achieving moksha. ...read more.

The river Ganges is very holy to Hindus as ancient scriptures state that the water of Ganges carries the blessings of Lord Vishnu's feet. This action would help comfort a Hindu relative because it ensures them that an act they have done, will benefit and reward the deceased, making them apart of the cycle of samsara. This is because Hindus believe that the river Ganges can cleanse a person's soul of all past sins. However, the funeral processes may differ among castes. This is because Brahmins (highest) are very religious and obey the Vedas in great detail. Their beliefs are fundamental on the Holy Scriptures. Whereas, the Chandalas views may differ because they are of a lower caste and are thought to be unclean and impure. Therefore they did not study the Vedas as they were seen to be above them. The religion that the Chandalas believe is esoteric, therefore it is complicated to they even believe in the basic beliefs in afterlife ...read more.