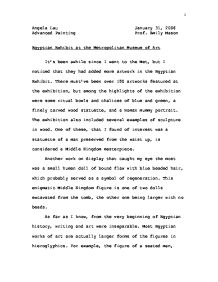 Egyptian Exhibit at the Metropolitan Museum of Art

Angela Lau January 31, 2006 Advanced Painting Prof. Emily Mason Egyptian Exhibit at the Metropolitan Museum of Art It's been awhile since I went to the Met, but I noticed that they had added more artwork in the Egyptian Exhibit. There must've been over 150 artworks featured at the exhibition, but among the highlights of the exhibition were some ritual bowls and chalices of blue and green, a finely carved wood statuette, and a Roman mummy portrait. The exhibition also included several examples of sculpture in wood. One of these, that I found of interest was a statuette of a man preserved from the waist up, is considered a Middle Kingdom masterpiece. Another work on display that caught my eye the most was a small human doll of bound flax with blue beaded hair, which probably served as a symbol of regeneration. ...read more.

Blue and green were often linked with water, the Nile, and vegetation. Yellow and gold stood for the sun and the sun god. Red and red-orange had complex meanings involving the desert, power, blood, and vitality. They demonstrate a keen observation of nature. The images of animal life and the plants of the Nile marshes, the agricultural land, and the desert express the Egyptian's love of life. On another level, these images usually have a symbolic meaning. A lot of Egyptian art have animal images, especially in sculpture and hieroglyphics. Animals were usually symbols associated with life and death, the characteristics of the gods, or the power of the King. For example, a Hippopotamus were greatly feared by the Egyptians, who often saw them as symbols of chaos. ...read more.

The males were conventionally portrayed with a reddish brown skin color and women, with a yellow-tan color shown in most paintings and reliefs. Egypt women were above all wives, mothers, and "mistresses of the house." As such, they played a subordinate role to men in art. The women would sit and stand behind the men, and when a monument, such as a tomb, is dedicated exclusively to a woman, her husband usually does not appear, perhaps to spare him the indignity of a secondary place. What I love about Egyptian art is the fact that there's so much history behind it, and how an ancient civilization so long ago can come up with such magnificent art without any of today's materials really intrigues me. They made things such as gaming pieces, scarabs, amulets, and votive figures, which were also on display at the museum. ...read more.