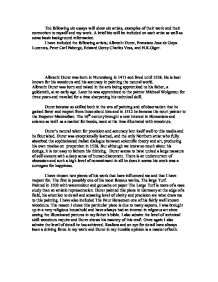 The following six essays will show six artists, examples of their work and their connection to myself and my work. A brief bio will be included on each artist as well as some basic background information. I have included the following artists; Albrecht Durer, Fransisco Jose de Goya Lucentes, Peter Carl Faberge, Edward Gorey Charles Vess, and H.R.Giger. Albrecht Durer was born in Nuremberg in 1471 and lived until 1528. He is best known for his woodcuts and his accuracy in painting the natural world. Albrecht Durer was born and raised in the arts being apprenticed to his father, a goldsmith, at an early age. Later he was apprenticed to the painter Micheal Wolgemut for three years and traveled for a time sharpening his technical skill. Durer became so skilled both in the arts of painting and of observation that he gained favor and respect from those about him and in 1512 he became the court painter to the Emperor Maximilian. The 16th century brought a new interest in Humanism and science as well as a market for books, most at the time illustrated with woodcuts. Durer's natural talent for precision and accuracy lent itself well to this media and he flourished. Durer was exceptionally learned, and the only Northern artist who fully absorbed the sophisticated Italian dialogue between scientific theory and art, producing his own treatise on proportion in 1528. But although we know so much about his doings, it is not easy to fathom his thinking. Durer seems to have united a large measure of self-esteem with a deep sense of human discontent. ...read more.

At the end of the melody the bird disappears back into the tree. The level of mastery and detail from the tiny leaves and flowers to the movement of the bird deserve respect and admiration. Edward Gorey was born in 1925 in Chicago Il. He was an author and illustrator with a definite flair for the morbid. Gorey served in the US Army from 1943 to 1946 and then went on to graduate from Harvard College in 1950 majoring in French. In 1953 he moved to New York where he began illustrating books for Doubleday/Anchor, where he remained for 7 years. Gorey had his first book "The Unstrung Harp" published in 1953. Edward Gorey was extremely prolific having nearly one hundred of his own books published as well as doing illustration and design work for other authors and theatrical productions. Many people have seen his work unknowingly and I myself remember the first time I saw his illustrations in the opening titles to the old television program "Mystery". Gorey seems to be able to capture a dreamy childlike quality with an obvious dark undercurrent. One has to look closely at his work to appreciate its full effect. In every corner and shadow seems to be some strange and fabulous creature just scurrying out of site. His illustrations of gardens and woods have such a feeling of hidden menace it causes the skin to crawl with morbid anticipation. Gorey's books and illustrations are best described as dark fairytales, and children's stories quite inappropriate for children. His style is distinctive and reminiscent of the days of woodcuts, giving a sketchy, yet strongly defined effect. ...read more.

"The Suitcase Baby" inspires me on several levels. I enjoy the feeling of dark humor it implies. It is also interesting in the combination of hard structured shapes and flowing organic forms. The most important aspect of this piece is the feeling of accessability it creates as if it is art you can just pick up and carry around with you, to show your friends or just to worry people at luggage claim at Heathrow. This is an aspect of art I have recently become interested in after learning about "object poems". The second piece, "Cataract" is a landscape which I feel shows Giger's true brilliance. At first glance it seems like a painting of a waterfall, then the Eye is drawn into the landscape which seems to writhe and crawl with some unholy energy. Faces seem to leer out of the shadows and silhouettes of strange beasts flicker in the corner of your eye. In conclusion all six of these artists tie together in several ways. They all exhibit classical brilliance, they all have an eye for detail and complete their work with precision. All of the artists seem to hide details in their work to constantly bring the viewer back for more. These six artists have and continue to be the biggest influences in my life. I find myself going back to their work again and again. I aspire to be able to achieve the same feelings and reactions in my work. Source materials Eichberger, Dagmar and Charles Zika, eds. Durer and his Culture. New York: Cambridge University Press, 1998. Gaiman, Neil and Vess, Charles. Stardust. 1997-98 DC Comics Giger, H.R. Arh+ . 2001 Taschen GmbH (Midpoint Press). Gorey, Edward. The Amphigorey . ...read more.