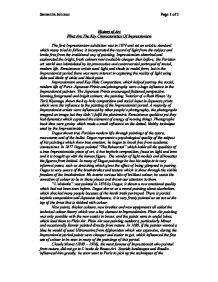 History of Art - What Are The Key Characteristics Of Impressionism.

History of Art What Are The Key Characteristics Of Impressionism The first Impressionism exhibition was in 1874 and set an artistic standard which many tried to follow; it incorporated the record of light from the subject and broke free from the traditional way of painting. Impressionism absorbed and exuberated the bright, fresh colours now available cheaper than before; the Parisian art world was intimidated by its provocative and controversial portrayed of social, modern life. Renaissance artists used light and shade to model form, but in the Impressionist period there was more interest in capturing the reality of light using dabs and blobs of white and black paint. Impressionism used Key Hole Composition, which helped portray the social, modern life of Paris. Japanese Prints and photography were a huge influence to the Impressionist painters. The Japanese Prints encouraged flattened perspective, looming foreground and bright colours; the painting 'Interior of a Bath House' by Torii Kiyonaga shows the key hole composition and social input in Japanese prints which were the influence to the painting of the Impressionist period. A majority of Impressionist artists were influenced by other people's photography; the photographs snapped an image but they didn't fulfil the planimetric Renaissance qualities yet they had dynamics which captured the elements of energy of moving things. ...read more.

Plein Air was painting outdoors, particularly Monet and occasionally Renoir painted directly from nature. In 1480, if the painter wanted a blue he would of used Ultramarine from Afghanistan which was expensive, during the Impressionist period paints were cheaper and easier to get, which influenced the free use of colour to be seen in many of the paintings of this period. Claude Monet (1840 - 1926), the most famous of Impressionist who painted from nature, did not go to L'ecole de Beaux Art. Seaside landscapes and Boudin influenced him greatly; he soon went to Paris to pick up the techniques of the Impressionist's use of light and tone. The influence of Japanese Prints is obvious in the painting "Ladies in the Garden". It was painted entirely outdoors and is about seven feet high and has the same keyhole composition which Japanese Prints had. Monet abandoned this type of work and started towards true Impressionism; he chose subjects that reflected light i.e. water, smoke, fog, mist and snow. In 1869 he painted "La Grenouillere" which was the first example of real intentional Impressionistic brushwork represented by the short, rapid strokes indicating the lively movement of the water; a lot of ...read more.

We see the contrast of extreme tones - the dominant variations of white, the black servant and the sudden, brilliant black of the ribbon round Olympia's neck. In Renoir's "The Swing" we see a depiction of modern life set in the gardens of the rue Cortot in Montmartre where Renoir had been living since the spring. It is a good example of the principle of dominant colour - here obviously blue - and of the complementary opposite colours in the shadows. The dapple of sunlight plays an important part together with the softness of the edges. In conclusion, the main influences of Impressionism are visible through looking at the paintings; keyhole composition, free brushstrokes, Japanese prints, limited palette, complementary colours, bright colours and the portrayal and depiction of light. Impressionism was a turning point for modern art; it influenced the traditional rules of art to be broken and set a standard of art which was to be followed by realism, post-impressionism and much more. Impressionism was a movement, a step forward from the elegant classicism to a more radical depiction of the world around and not an idealised one. ?? ?? ?? ?? Samantha Johnson Page 1 of 2 ...read more.