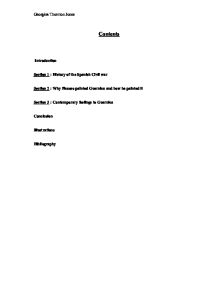 Contents Introduction Section 1 : History of the Spanish Civil war Section 2 : Why Picasso painted Guernica and how he painted it Section 3 : Contemporary feelings to Guernica Conclusion Illustrations Bibliography Introduction Picasso's Guernica is one of the most powerful and disturbing anti-war paintings ever produced. I have always admired Picasso's works and wanted to write a dissertation on some aspects of his work. I first saw his Guernica as a poster in my History of Art room. I was fascinated by it and wanted to find out more about its background. I then went to Madrid and saw this vast painting in the Rene Sofia Museum. Its scale and disruptiveness intrigued me to study this painting in depth. I will look at a short background to the Spanish Civil War and why it happened and how it destroyed the Basque town Guernica and everyone living in it. Then I will look at and study Picasso's reaction to the bombing and how his famous anti-war painting came about. Then I will look at the contemporary reactions to Guernica and how it still affects people alive today. Section 1: The Spanish Civil War This is the background, the context, which informed Picasso, a Catalan in voluntary exile in Paris, and led to the painting of Guernica, which will be discussed in the following sections. Between 1936 and 1939 over 500,000 people were killed in the Spanish Civil War. The depression of the 1930s hit Spain hard. Unemployment rose and Rivera 1* did not have the ability to sort out Spain's financial mess. The army withdrew its support and Rivera had to resign. In April 1931, elections were held in Spain, which resulted in Republicans winning all the major cities in Spain. Alfonso 2* decided to abdicate, as he feared that if he stayed on, Spain would plummet into chaos. Those victorious at the election then declared Spain a Republic and the monarchy was abolished. ...read more.

had found him a large studio on the Rue des Grands-Augustins which, it was hoped, would encourage the painter. Then, at the end of April 1937 the Condor Brigade - aircraft belonging to Franco's German allies - bombed to ruin the ancient Basque capital of Guernica, on its market day. There was a straight propaganda issue involved: Franco, the Germans and the Vatican denied the bombing and claimed that the town had been blown up by withdrawing Republican forces. Three photographs of the bombing of Guernica appeared in the newspaper Ce Soir on 1st May 1937. Picasso then flung all his feelings of horror into Guernica. He immediately began a series of preparatory drawings for the huge frieze size painting that we know it is today. The symbolic elements were present in the very early sketches: the bull, the horse, and the bearer of light. The whole picture was filled with mourning, black and white, suggesting death. Picasso wanted to show the viewers how his painting came about. He had long been careful to have a record kept of all his productions, and had quite recently remarked on an interest he had in making a public record of the workings of his mind as he proceeded through a painting. 'It would be highly interesting', he said, 'to fix photographically not the successive stages of the painting but its successive changes. In this way one might perhaps understand the mental process leading to the embodiment of the artist's dream.' 3* Here was the opportunity for such a study. However, some people think that this undertaking - the first time that an artist had thought to preserve all the stages of a painting, and catalogue them, before embarking on the work - was in large part the work of Dora Maar. All or nearly all the drawings were preserved, and the work on the canvas was photographed by Dora Maar seven times, from the first graphic descriptions to the final _________________________________________________ 1* - Lorraine Levy - "Picasso" 2* - Photographer, one of Picasso's mistresses at the time. ...read more.

Hommerabi, another official, had views of the painting and they were expressed. He said "I would guess that a lot of people who walk past the painting each and every day have no clue what it is about. I would also guess that the only comment they make on it is something along the lines of "Gee, I could have painted that!" Then they slap their partners' backs and have a good laugh. Covering up the painting does not remind people of the horrors, having it in full view, and having people understand its history and meaning, will." From looking at this statement we see that a majority of the population probably have no idea what Guernica is about. However, we also see that from it being covered up, people, even now, realise the horrors of war just from looking at the painting. It is interesting to note that 70 years later, to some people, it still carries that same symbolic meaning. Conclusion. Guernica is a work that we know intimately, in some ways. We know how it was conjured up, how it was built up, put together, put in opposition, and so on; and we also know, from the photographs, a great deal about how the picture was developed when it was actually on the canvas. But what people know about the picture most of all is that it is a masterpiece, and that it is on the right side in the Spanish Civil War. In this opinion at least one of the intentions of the painting - to have a propagandist function - has been successfully fulfilled. When I first saw a reproduction of Guernica I had no idea about its contents and the civil war that inspired its iconography. As a result of my research for this dissertation I have learnt so much more about nationality, the context of the war, and, of course Picasso's deep feelings as a Catalan. I only really knew about Picasso from his Cubist works but now I have discovered a different side of Picasso which I had never learnt about before. ...read more.