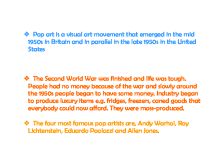 * Pop art is a visual art movement that emerged in the mid 1950s in Britain and in parallel in the late 1950s in the United States * The Second World War was finished and life was tough. People had no money because of the war and slowly around the 1950s people began to have some money. Industry began to produce luxury items e.g. fridges, freezers, caned goods that everybody could now afford. They were mass-produced. * The four most famous pop artists are, Andy Warhol, Roy Lichtenstein, Eduardo Paolozzi and Allen Jones. * Pop Art is a 20th century art movement that utilized the imagery and techniques of consumerism and popular culture. ...read more.

* The artists began to associate more often with one another in the 1960's. In 1961, the Pop artists showed their work at the Young Contemporaries Exhibition. The list of artists included David Hockney, Peter Phillips, and Derek Boshier. On the New York side of Pop Art, such artists as Andy Warhol, Roy Lichtenstein, and Tom Wesselmann, began exploring their own aesthetic program. Throughout the 1950's and 60's, these artists created work that was deeply rooted in culture, both in the United States and Europe. By 1965, when Pop artists showed their work at the Milwaukee art center, Pop Art had become well defined and regarded. ...read more.

He created his pictures under the influence of brand name industry designs. * Warhol liked to use bright colours which were mostly printed. This is Warhol's most famous piece of pop art. It is a piece of Marilyn Monroe but stylized, contrasted in bright vibrant colours. The things I like about this picture is that he has taken a real life image and changed it to make it look cartoon-like. On the other hand, I don't like the way it looks as a whole. In my honest opinion I think it looks a bit vulgar. It was probably meant to look like that, but I don't think it looks attractive. ...read more.