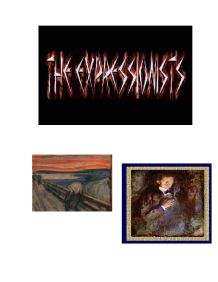 What do we mean by Expressionism? Expressionism is when a person or a group of people portray their feelings and emotions over a particular matter in such a way that their message is delivered across. Whether this is in the form of singing/dancing, art, acting, debating or by physical methods. We say that they are expressing their feelings. When they are expressing their feelings, you can clearly see the look on one's face which can explain the way they are feeling and what they are expressing. We call this an expression. One expresses themselves for many different purposes, expression holds the key to discovering what type of feeling or state that one is experiencing. What do we mean by expressionism in art? Expressionism is one the many styles of art in which the intention of the artist is not to produce a work-of-art that is very accurate, realistic, and basic; but to depict his/hers inner- emotions by creating an image (or various images) ...read more.

Many of these artists and their corresponding works-art are still admired and researched in this modern era, and this particular topic in art still lives on. German expressionism originated in the atrocious trenches used in World war 1. Once the war had terminated and was won, large numbers of German soldiers were left traumatised and their minds in turmoil after such shocking events. These painful conflicts lead the Germans to despise the war commanders and when the Kaiser of that time period abdicated, the German citizens rose to support the November Revolution which was a policy to create a new Democratic Germany. Activists joined expressionist groups in order to help get the message across the politicians. They encouraged artists, writers, poets' architects and musical composers to join their group and help form a new society. However political opposition slowed down the building of the movement and later Nazi soldiers began to detain and execute many of these activists. ...read more.

In 1885 he went to on short study tour to Paris, in the same year that he painted the sick child. In 1889 he went yet again to Paris and held an exhibition of his work in Oslo (Christiana at that time).It was a few years later that he painted 'The Scream'. This painting is the most famous painting in the entire work of Edward Munch, with high quality and level of expression. Within this painting is fear and death although the facial expression is largely created by the coulours and lines of the image. This is one of the most fantastic pieced of art to be produced and is helped to gain such a level of success by the bright colours, facial features and original shapes. Munch then made many trips to Berlin and Norway where after an other deacade of traveling and painting he died at the age of 81in 1963. He is said to be the fore-father of expressionism in art and one of world's greatest expressionist. ...read more.