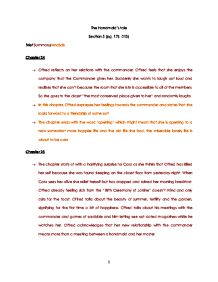 The Handmaid's tale Section 5 (pg. 176 -213) Brief Summary/Analysis Chapter 24 * Offred reflects on her relations with the commander. Offred feels that she enjoys the company that the Commander gives her. Suddenly she wants to laugh out loud and realizes that she can't because the room that she is in is accessible to all of the members. So she goes to the closet "the most conserved place given to her" and randomly laughs. * In this chapter, Offred expresses her feelings towards the commander and states that she looks forward to a friendship of some sort. * The chapter ends with the word 'opening' which might mean that she is opening to a new somewhat more happier life and the old life she had, the miserable lonely life is about to be over. Chapter 25 * The chapter starts of with a horrifying surprise for Cora as she thinks that Offred has killed her self because she was found sleeping on the closet floor from yesterday night. When Cora sees her alive she relief herself but has dropped and ruined her morning breakfast. Offred already feeling sick from the "Birth Ceremony of Janine" doesn't mind and only asks for the toast. Offred talks about the beauty of summer, fertility and the garden, signifying for the first time a bit of happiness. ...read more.

* Knowing that Ofglen is also a nonbeliever gives hope and a sense of life to Offred because now she knows that her perspective of Gilead's society is similarly to that of some others. * The ending of the chapter is sharp as is remind Offred that the smile that exist on her face because of Ofglen is once again reinforced with idea of the power of Gilead's people hold. * Another interesting thing was the mentioning of the worlds natural resources being extinct, which were the whales. Tropology Symbolism- Flowers * "I would think, Maybe you appreciate things more when you don't have much time left. I forgot to include the loss of energy. Some days I do appreciate things more, eggs, flowers" (pg. 210) Offred's appreciation for flowers and eggs depicts that she wants to and needs to get pregnant or otherwise she will be send to the colonies. The joy and freedom that Offred has NOW will be taken away from her. * "She'd like me pregnant though, over and done with and out of the way, no more humiliating sweaty tangles, no more flesh triangles under her starry canopy of silver flowers." (pg. 214) the flowers symbolize Serena's hope for Offred to quickly get pregnant so she can be moved to another family. ...read more.

The commander who was kept "hidden or conserved" in the first sections has started to open up and we see that he isn't a bad guy, he sympathizes with Offred for using butter as a moisturizers but in a humorous way, he still doesn't realize the pity in this situation where they have to hide scrapes of butter to keep them self's protected from dry skin. Gilead's society * Having a computerized store "Soul Scrolls" that prints out demanded prayers really shows how important religion is to Gilead society, also the printing of "desired prayers" bring that idea of manipulating the prayers so they are biases and beneficial to Gilead's society. "toneless metallic voices repeating the same thing over and over" (pg 167) shows the reader how controlling and committed the society is so people of Gilead will pray and another thing I felt was that the machines have taken away the beauty of the religion, like the machines were there to only monitor the environment. Predictions/Questions * I wonder what Nick gets out of the meetings that he arranges for the Commander and Offred, because I mean he probably is doing it for a reason, for getting some goods from the black market or receiving some sort of freedom from the Commander. * Will Serena Joy find about the meetings between the handmaid and the commander or does she already know and has decided to live with the fact? ?? ?? ?? ?? 1 ...read more.