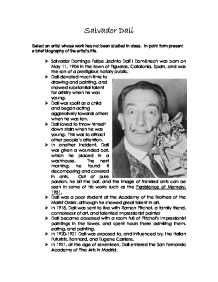 Select an artist whose work has not been studied in class.  In point form present a brief biography of the artist’s life.

identify the style that the artist works in.  explain the characteristics of this style.

Salvador Dali's life and art were very closely related. Everything in his life was reflected in his art. All the major changes in his works and styles represented important turning points for him. When Dali was younger, he experimented with different styles. The first style he used was soft, blurry and seemed a little bit out of focus, although his use shadowing was well from the beginning. Dali's early works were not very impressive, but he was very talented and dedicated to his art work.

Surrealism is a form of painting that Dali started using next. The purpose of this kind of art was to mirror society and show it what was wrong with it. For example, Dali was not friendly with the aristocrats of his time, in fact he hated them. So one of his surrealist paintings showed an aristocrat with no face.

This was supposed to symbolize that aristocrats did not listen to anyone. It was also during Dali's surrealist period when he expressed many of his sexual ideas in his works. Some examples of these types of works would be The Apparatus and The Great Masturbater, and many other of Dali's paintings possessed sexual meaning. This was also a period in his life when he was very interested in psychology, especially Freudian psychoanalysis. Dali even showed Freud in some of his works.

Surrealism was a important tool for Dali, using it he could express his feelings, dreams and political standings. His art sometimes seemed as if it was a way for him to put all the delirium in his head down on canvas, and that was what makes it so interesting. Surreal painting was where Dali first started using a extraordinary, fascinating style of art, that style is called double imagery. This was when he showed two different images in the same painting. This time in his life was also emphasized because it was when he first met his wife Gala. Gala was thirteen years older than Dali, and many people especially his father thought they were crazy for being lovers because of this age difference. It did not effect them though and they got married and stayed life long companions to each other. For this reason Gala was a very important part of his life and therefore appeared in many of Dali's works.

Gala was responsible for bring Salvador back to the Christian faith which completely changed his style of painting, from surrealism to classical. These classical works were Dali's most moving works. This was the time Dali was influenced by new beliefs and new discoveries. He was now more interested in science than ever before, and the recent discovery of the atom and the double-helix structure of DNA. He continued to use double imagery, and it was at this time when he created his majestic masterworks. As a masterwork was over five feet in any direction and took over a year of Dali's year to produce. These were sixteen larger than life works that were very inspiring. These masterworks were good examples of showing Dali's understanding between science and religion.

describe the way the artist uses materials and techniques.

The Paranoiac Critical Method, which was developed by Dali in the early 30’s, was simply an attempt to arrange irrational things into a way that made sense. He wanted to bring light upon the unreliability of perception, conception and understanding. Dali once described it as:

"... A spontaneous method of irrational knowledge based on the systematic objectification of associations and delirious interpretations..."

He states that it is just an impulsive technique, which involves breaking down the barrier of the mind’s way of thinking, so we can create our own perception of objects. While Dali painted an active process of the mind would allow him to visualize images, which he would include in his painting and help him achieve his final product.

Photocopy three examples of the artist’s work.  Identify the title, date, size and materials of each example.  Underneath each photocopy, write a brief description of the artwork. 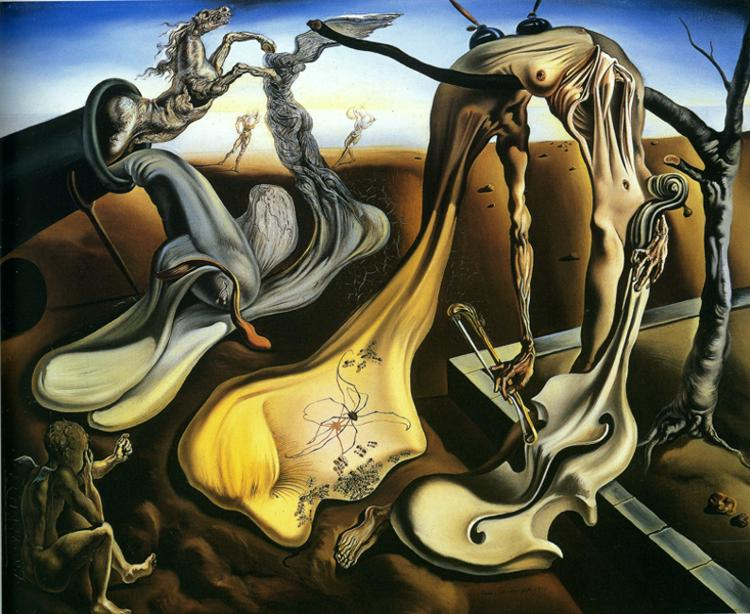 Daddy Longlegs of the Evening - Hope!

When first seeing this painting, one may think that it is filled with death, decay and destruction. The drooping corpse and the melting shapes reveal the feeling of melting away and dying. This painting is filled with so much more than pain. No matter how ugly the situation is, there is still hope and this is what Dali wants to prove to us with this surreal painting.

Painted in 1940 in the beginning of the Second World War, Dali wanted to examine dismay of the war and enlighten the viewer with hope. To the left of the canvas we see a giant canon held up by a crutch. Crutches are a metaphor that Salvador uses in many of his art works as a symbol for existence and fatality. The canon simply represents the destruction of the war.

Firing from the canon into the lonely blue sky is a single white horse. The horse, full of dominating speed, could resemble one of The Four Horsemen from the Apocalypse, as the events occurring in Europe at that time could bear a resemblance to the legendary Apocalypse.

The corpse strung over the tree is really a self-portrait of Salvador Dali, as he often includes self-portraits in his paintings. Resting on the top of the figure are two inkwells, which generally represent the signing of the treaties but Dali often uses them as a sign of sexuality. Devouring the soft melted face are tiny black ants. The ants emphasize they decay and decomposing of the painting. Ants are another common element in his paintings.

In the bottom left corner, a cupid figure sits alone. The symbol of purity and innocence is thrown into this painting, horrified of the monstrosity of the destruction. The cupid resembles a little light but also brings pain into the picture, as it appears like a young child crying in fear.

Lastly, in plain view we see a spider, which is a Daddy Longlegs. The black spider is placed in the center on a very light background making it the center of focus. Daddy Longlegs, when seen in the evening, are French symbols for hope. Dali wants to express that amongst all the tragedy; there will always be hope and that is the one thing that can never be stolen from you. 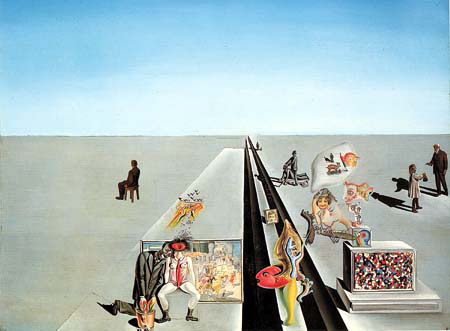 The First Days of Spring

Oil and collage on panel

The setting for this image is an expansive, smooth gray plane. It is elevated on the right and steps down to a lower level at the left. Clustered in the middle of this space is a variety of strange and colorful surrealist images. In the distance is the small shadowy figures of a man holding the hand of a small boy. Toward the left is a figure seated in a chair with his back turned to the entire scene.

This work was created during a time of extreme personal stress for Dali. His father was becoming increasingly disappointed with his son’s choice of profession and unorthodox behavior. The figures of the man and boy appear several times in Dali’s future works. They represent Dali’s wish to heal his relationship with his father. The seated figure on the left has also been speculated to represent the artist’s father. 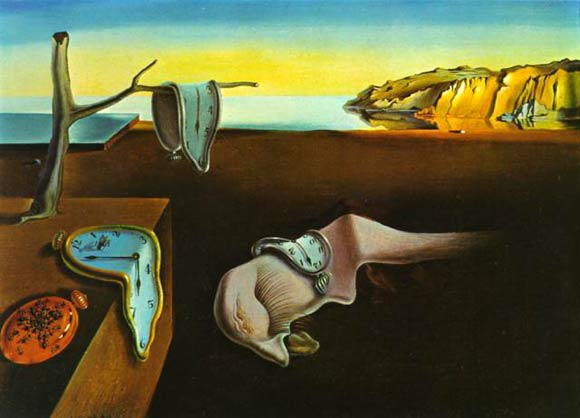 The Persistence of Memory

In The Persistence of Memory, Salvador Dali illustrates a surreal
landscape that suggests peacefulness is to be cherished and time has
no relevance in an effort to reshape public mindset.

In the distance of The Persistence of Memory, a rocky waterfront is
exhibited. The cliffs are a depiction of Salvador's beloved Cape Creus
of Spain. There he often sat among the hills and soaked in the amazing
surroundings, searching for inspiration. One hot August day while he
ate his lunch, overlooking the water, he noticed that his Camembert
cheese became increasingly runny. Mesmerized by this sight, he became
compelled to incorporate the principle of the misshapen substance into
his paintings, thus creating the famous melting watches.  In tribute to the place that birthed such an idea, he used Cape Creus as his backdrop because it was a definitive symbol of his personal peacefulness.

The monstrous creature draped across the painting's center resembles the artist's own face in profile; its long eyelashes seem insectlike or even sexual, as does what may or may not be a tongue oozing from its nose like a fat snail.