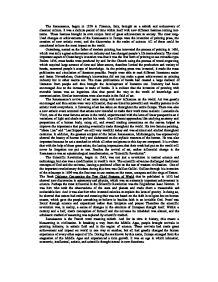 The Renaissance, begun in 1350 in Florence, Italy, brought on a rebirth and rediscovery of classical culture.

The Renaissance, begun in 1350 in Florence, Italy, brought on a rebirth and rediscovery of classical culture. It was a definite period of time within itself with new different features coming into terms. These features brought its own unique form of great achievement to society. The most long-lived changes or achievements of the Renaissance in Europe were the invention of printing press, the creation of new artistic event, and the discoveries in the realm of science. All of these could be considered to have the most impact on the world. Gutenberg, named as the father of modern printing, has innovated the process of printing in 1436, which was truly a great achievement on industry and has changed people's life tremendously. The most important aspect of Gutenberg's invention was that it was the first form of printing to use movable type. Before 1436, most books were produced by and for the Church using the process of wood engraving, which required large amount of time and labor source, therefore limited the production and variety of books, narrowed people's scope of knowledge. ...read more.

Leonardo da Vinci, one of the most famous artists in the world, experimented with the laws of linear perspective and variations of light and shade to perfect his work. Also different approaches like studying anatomy and proportions of a human body, using oil, and overall making corrections on the canvas helped to improve the importance that painting eventually made throughout the world. His two famous painting, "Mona Lisa" and "Last Supper" are still very worthful today and was admired and studied throughout centuries. In addition, the greatest sculptor of the Italian Renaissance, Michelangelo, has expressively showed the beauty of human body and elaborated on the stylistic manners of the human. He was also important because he set a standard to which all other sculptures to this day are compared. It is evident that with the help of these great artists, the lasting impressions that their work had put on the world will never be forgotten nor put to rest. Besides the revival of art, anther influential change in the Renaissance was an epistemological transformation, or "Scientific Revolution". ...read more.

Proof was found through science and experiment rather than Scripture and prayer. Therefore the scientific revolution was, in reality, a series of changes in the structure of European thought itself. Within a century and a half, man's conception of himself and the universe he inhabited was altered, and the scholastic method of reasoning was replaced by scientific method. Renaissance is the French word meaning rebirth. And for its time in history, this meant a blossoming in civilization. In breaking a way from the Middle Ages, people brought revivals in printing industry, in artistic field and in the region of science. These revivals had made great achievement and impact on world in one way or another, but all had greatly changed the human experience of every other aspect of life. During the era known by this name, Europe emerged from the stagnation of the Middle Ages and experienced a time growth. It was an age in which industrial, economic, intellectual, artistic, and scientific thought turned in new directions. ...read more.