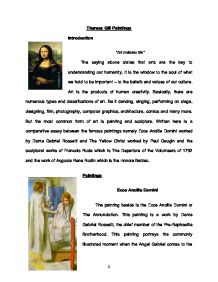 Theresa Gill Paintings Introduction "Art imitates life" The saying above states that arts are the key to understanding our humanity. It is the window to the soul of what we hold to be important - to the beliefs and values of our culture. Art is the products of human creativity. Basically, there are numerous types and classifications of art. Be it dancing, singing, performing on stage, designing, film, photography, computer graphics, architecture, comics and many more. But the most common form of art is painting and sculpture. Written here is a comparative essay between the famous paintings namely Ecce Ancilla Domini worked by Dante Gabriel Rossetti and The Yellow Christ worked by Paul Gaugin and the sculptural works of Francois Rude which is The Departure of the Volunteers of 1792 and the work of Auguste Rene Rodin which is the Honore Balzac. Paintings Ecce Ancilla Domini The painting beside is the Ecce Ancilla Domini or The Annunciation. This painting is a work by Dante Gabriel Rossetti, the chief member of the Pre-Raphaelite Brotherhood. This painting portrays the commonly illustrated moment when the Angel Gabriel comes to the Virgin Mary to tell her the news that she will give birth to the Lord. Although Rossetti depends on earlier traditions for many of the symbols he places in the scene, his method of employing these symbols, his depiction of space, and most significantly his portrayal of the two figures represent significant departures from earlier tradition. Here you'll see Angel Gabriel holding a stem of lilies giving them to Mary and presenting her with a quintessence of the chastity and purity she is fated to continue throughout her life. ...read more.

Gauguin on the other hand is a postimpressionist painter, whose lush color, flat-two dimensional forms and subject matter helped form the basis of modern art. He is passionate to his work. He retained the qualities of expressive color, denial of perspective, and thick, flat forms. He also is a depressed painter after his failed suicide attempt. Each artist had different goal while creating their masterpieces. Rossetti's goal is to revitalize his art through medieval inspiration whereas Gauguin's goal is to regard only the eye, and abandon the mysterious centers of thoughts, so falling merely scientific reasoning. Both of them succeed with their goals from the way their art has resulted. The differences between the two pictures had nothing to do with art at mid-century and art at late century because there is no competition between the times. The only difference is that, their way of doing things and the way they imagine things that made them to create the paintings. In many ways, Gauguin's work is closer to twentieth century because it was at this time where people are so religious. As you can see on the painting of Gauguin, the details of the picture is so old fashioned. The costumes, it depicts during the old times particularly during the time of Jesus. Rossetti's work on the other hand, looks towards our own time. Observe the way he painted Mary, it was so different from the other paintings created by other artists. Her face is so innocent, and so adolescent-like. Moreover, the confined nature of the space, the barrenness of the surroundings, Mary's intense expression and her expressive pose all further the image of a young girl who is confronted with her own adult identity and is terrified which make it different from the other paintings of The Annunciation from other artist's work. ...read more.

And because of that, the Societe accepted the popular ruling and verdict and refused to recognize it as a statue of Balzac. And because of that, Alexander Falguiere, was assigned to do another statue for Balzac instead. However, it is really good that Rodin did not choose to fight and compete with Alexander. He really is a humble artist and accepts his fate without hard feelings at all. Their works were not that successful as they expected because there are always people who disagree with us. There are people who misunderstood what the artist wants to say to their audiences. And because of that, they would say something bad about the artist's work which would eventually lead to his failure. But despite that, there are also people who appreciate their work and were able to understand fully about the meaning. The artist's role within society has changed because nowadays, especially artists they are careful on their painting or sculpture to avoid criticism. They have to choose a subject that would avoid bad criticisms. However, there are also some artists who have the guts to create on whatever they like and not be afraid of the audiences disapproval. After all, some artists express themselves through their paintings. Conclusion There are many works of arts. There are many artists worldwide. Some are successful with their endeavor and some were a complete failure. Some were known and some were not. Some were professionals while others amateur. It takes complete effort to become an artist and it takes art appreciation and talent to become one. Through art, we can express ourselves either by dancing, singing, painting, sculpting depending on what you are good at. The result of your creation depends on what mood you are in. Again, as what is stated above, art is the window of our soul. It reflects our personality, moods, characteristic, style and taste. ...read more.