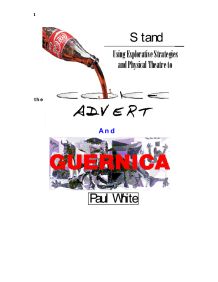 Using explorative strategies to help understand the 'Coca-Cola Advert' lyrics and Picasso's Guernica. To me, the texts from the coke advert and from Guernica mean a great deal. As we read into them and, through drama, begin to find ways to understand them, we can discover many serious morals and lessons to be learnt. These cover powerful and highly important issues such as the future of humanity, the essence of hope and optimism inbred into each of us, and the manifestation of evil in the world. In Guernica, Picasso embraces universal truths. It confronts us with the bitter facts of what has been happening in Iraq while at the same time documents what happened at Guernica. Picasso had told the truth about Guernica but with a slant. Because he hadn't totally immersed himself in Historical time, he had spoken across the boundaries of all time with a message that rings true now, then, and sadly, in the future. For me, Guernica is a vivid reflection of the violence imposed on the town. But beyond that, I believe it represents a loud warning against the disasters caused by war and man's destruction. So much of the artist's feelings and emotions are evident in the painting: the way it is presented, segments seemingly 'flung' together in an incoherent confused horror and panic. This demonstrates the distortion of Picasso's outlook on the scene. Hitler's assault on Guernica stole the lives and the testimonies of many people of the town. By transforming a real life event into a form that can never die, he consequently immortalises the people from the town that he depicts. These people are given a second chance; their feelings can be heard by anyone who will look at the painting. There is a plethora of symbols and clues hidden in Guernica that are directly linked to the themes of war, death and destruction. ...read more.

The other party consisted of Chelsie and Nicole and represented Picasso. Just like coca cola had created song that conveyed a message, Picasso had created Guernica. Through this he was proclaiming a message of destruction interwoven with a theme of hope. Coke's advert professed the ideals of humanity but in doing so highlighted the impeding factors that induce the status quo. In this way, both parties are artists trying to convey a message that discounts the other. However, the goal of both sides is ultimately the same, both the Guernica painting and the coca cola advert are striving for peace and happiness in the world. One reveals how stricken the world is with evil at the moment with references of how to abolish this. The other source looks to a future utopia and uses subtext to highlight the resistant factors of this concept. The message is the same yet ironically self-conflicting. We attempted to convey this statement of 'conflict in spite of eternal agreement' as one of the main ideas behind our work. During the exploration of the two texts, it became clear that we would need other factors to aid our learning; such was the nature of the topic. We were introduced to 'explorative strategies'. These are a variety of methods useful when embarking on a subject surrounded by certain themes and issues. By approaching Drama from a different angle we can begin an effective familiarisation process with some of the more difficult concepts. Some of the strategies include 'sound collage', 'machine', and 'hot seating'. Each explorative strategy is Highly flexible - can be used simply in an investigative manner, or developed further into a polished performance; however, it requires careful selection for some strategies may be irrelevant. I think 'explorative strategies' are brilliant and inspiring ways of developing your personal understanding and confidence in areas otherwise aloof. Initially, our group found difficulty in identifying the similarities and connections between the texts. ...read more.

It also suggests that even if all 'hope' is lost, there remains an everlasting factor of hope inbred into each one of us - hence the invisibility of the stone. The piece concludes with a tableau. An image is created where all four actors are in a circle, linked in some way, but not necessarily upright. The impression is of one object comprised of two factors. Our bodies occupied unnatural positions e.g. arched backs to indicate a morphing process. Through the quest for hope in ourselves as opposed to hope in general, both parties were united in eternity. Picasso's 'Guernica' and Coke's advert lyrics both aim for an end to suffering. We as individuals need to nurture and connect with the element of hope that resides in each and every one of us. Appendix The poem can be seen as a literate version of the painting, describing the events in the painting, converting the painting's emotions into 'cries'. The poem is extremely powerful and disturbingly effective, captivating the reader's attention, as though screaming the content into one's face. The repetition of the word "cries" is a very important contributor to the success of the poem; it painfully makes explicit the emotion of pain by conveying the message of the picture in the result of that pain, (a cry). The poem also uses dramatic imagery to develop an image of great clarity in the reader's mind. Also successful is the way in which Picasso personifies the objects described in the poem. It is almost as if the objects have been so affected by the tragedy, that they have been possessed by the evil and are thus manifesting that evil through cries. As an accompaniment to the painting to provide additional content, I believe this poem is extremely useful and valuable. However, I don't believe that it should be regarded as an alternative to the painting as it would not do it justice. For instance, the way in which Picasso uses image in a phenomenally successful way to demonstrate the destruction of war cannot even be allowed to juxtapose the poem. ...read more.