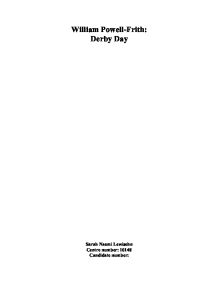 In the biography, Frith quoted Thackeray's appraisal of Leech's gent ...who all of us know, 14 which he found true to life in every detail, from the ...outrageous pins and pantaloons 15 to the common habits of sucking his cane in the streets and smoking cigars. This type of adolescent male was seen as the product of the new urbanization and modern commercialism of London, bearing ...the best and the worst effects of modern city life 16 as Charles Kingly remarked. Academia too upheld these presumptions. N. Macnamara, a Victorian anthropologist, maintained that the children of such third generation of London city dwellers possessed psychological tendencies, making than ...unreliable in times of difficulty, excitable and nervous...wanting in self reliance...the effect of constant noise and bustle and other conditions which surrounded them in the homes of their childhood 17. Such young gentlemen were characterized as facile, pretentious, impulsive, and sophisticated. Frith's conception of the young gent bears all the qualities that the young gent was supposed to have at the time, however, Frith has treated the young gent more sympathetically than most people would. He is weakly built and is contrasted in juxtaposition to the strongly built, strong featured countryman on his right. The degree of corruption which McNamara identifies in the young gent is emphasized here through illustration. The stress of modern city life is displayed by the young gentleman not only through his physically weaker frame but also through his physiognomy and expression. Laziness rather than depth, concerning both intellect and feeling, were associated with the type of the young gent. The carelessness of the adolescent gentleman is communicated in other details of the painting. To the Victorian eye, the absence of the young gent's typical chain and watch would be immediately recognizable. These can be found on the canvas in the hands of the thimble-riggers just behind him. The young gent has obviously had his watch and chain stolen by the thimble riggers. ...read more.

This is perhaps because their behaviour is not as refined and dignified as the other aristocrats. They are set up in contrast to these other, better looking aristocrats whose behaviour and physique reflect a higher level of decorum and nobility. With this lower group, the women's features are not so idealized, and their profiles are much less regular to the members of the barouche party. One of the men is even wearing a false nose, and bears wide full lips. The tousled hair man and the one leaning towards the girl on stilts have weaker chins, are shorter and are less firmly defined. His heavy lidded eyes give him a grim, foolish expression. Frith is trying to put the message across that although aristocrats are expected to have idealized, perfect features, they can easily lose them through abuse. This is demonstrated by the two young aristocratic men entering the gambling tent. The expression of the last figure is disappointed and looks as though he is about to lose or has already lost. Conclusion Derby Day was not only one of the most sensational crowd scenes William Powell Frith was to paint but it also satisfied the crowd conscious Victorian audience it was designed for. An entire range of characters that would have been found in Victorian society are provided in this painting. His strong characterization of the different figures were bound to provoke strong reactions amongst the members of society, revealing a passionate interest in the intensity of emotion, which can only be explained in physiognomical belief. Frith did not possess the refined sensibility or the degree of intellectual judgement to invert the statement that he was making about Victorian society, which was the reason for its success. This clear, simple painting reflects Frith's conception of modern day life and his contemporary beliefs won the reception of thousands of people and is still regarded as a masterpiece today. The identification of the familiar individual and social types is the main attraction of this painting, and was a factor that existed in real life. ...read more.