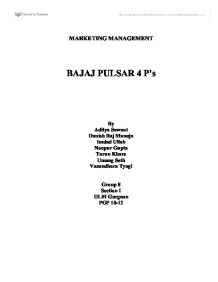 2. The concept of "Definitely Male" was brought in with the launch of Pulsar to target the youth customers and it was well accepted by the market. 3. The punch line "Definitely Male" was later converted to "Distinctly Ahead" to project its technological superiority over its competitors. * Events And Experiences Bajaj Auto Ltd. promotes its various brands through exhibitions, local fares, auto shows, Television Shows, test drive services etc. * Sponsorships Bajaj sponsors various events to promote its products. For example it sponsors a T.V. program called " Stunt Mania" broadcasted on M T.V. 4P's Of MARKETING PRODUCT NAME: Hero Honda CBZ Xtreme INTRODUCTION: Hero Honda CBZ launched by the joint venture Hero Honda in the year 1999.It is India's first four stroke motorbike which was designed in sports oriented manner Catching the fancy of young generation,this model created waves and was in huge demand for some time. It speed is one major feature which acts the bike's USP. The Hero Honda CBZ was attached with the 156 cc of engine which was competent enough to generate a great mileage, pick up and overall performance. ...read more.

4.PROMOTION: * Promotional Strategy: they used Above the line using mass media to promote CBZ Xtreme. Major above-the-line techniques include TV and radio advertising, print advertising and internet banner ads. This is basically a Pull strategy to attract youths and working class people. * Advertising: Tag line "Live Extreme" The idea is to project the brand as an Extreme machine for those who like challenges and then they position as "Thinking is such a waste of time" lates adversties says " live off the edge". Also brand Hero Honda already projecting as " Desh Ki Dhadkan" so that also help to give feel of Indianess in CBZ Xtreme. * Publicity: Hero Honda used various tactics for publicity like Festive offers, Hero Honda Passport Pro gramme, Finance deals at 0 % of Rate of interest, free gifts in order to attract new customers. Conclusion: from the above study we came to analyze that 4 P's of marketing mix of Bajaj Pulsar and its rival Hero Honda CBZ xtreme. It was found that both the companies are constantly engage in innovation and promotion of their products to stay ahead of each other, companies also decide upon their product, price, Place and promotional strategies from time to time depending upon the life cycle stage of the product. ...read more.

***
There is some useful information in this essay but overall there is not enough research and the writer has not thought enough about what they are writing.