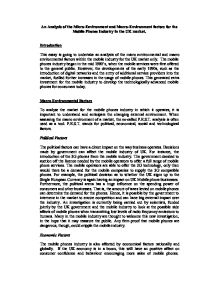 An Analysis of the Micro-Environment and Macro-Environment factors for the Mobile Phones Industry in the UK market. Introduction This essay is going to undertake an analysis of the micro environmental and macro environmental factors within the mobile industry for the UK market only. The mobile phones industry began in the mid 1980's, when the mobile services were first offered to the general public. However, the developments of the early 1990s, such as the introduction of digital networks and the entry of additional service providers into the market, fuelled further increases in the usage of mobile phones. This generated extra investment for the mobile industry to develop the technologically advanced mobile phones for consumers today. Macro Environmental Factors To analyse the market for the mobile phones industry in which it operates, it is important to understand and anticipate the changing external environment. When assessing the macro environment of a market, the so-called P.E.S.T. analysis is often used as a tool. P.E.S.T. stands for political, economical, social and technological factors. Political Factors The political factors can have a direct impact on the way business operates. Decisions made by government can affect the mobile industry of UK. For instance, the introduction of the 3G phones from the mobile industry. The government decided to auction off the licence needed by the mobile operators to offer a full range of mobile phone services. The mobile operators are able to offer the 3G technology, only then would there be a demand for the mobile companies to supply the 3G compatible phones. ...read more.

Thus, firms in the industry, in order to gain a competitive edge over other firms have to continuously investment in research and development and develop technology that will be operational on mobile phones. For instance, High bandwidth with potentials for video conferencing on phone is a third generation advanced on mobile phones. In UK, mobile operators such as '3' have facilitated the technology and Vodafone has also bought the licence for operating the 3G phones from the government. Market analysts would say that this has opened a new dimensional market for customers now and this would make mobile phones companies develop new phones based on the 3G technology to promote future sales. Mobile phone users are becoming increasingly aware of quality and expect a product that is reliable during use. GSM has been an unqualified success because it works, offers definite advantages over first generation and is at a price where everyone can access the technology. One problem that has been apparent over recent years in UK, is the high market exposure given to new features and technologies, which are not well proven and tested before launch. WAP was a prime example of this. A great deal of effort has been injected into WAP to make sure the early teething problems have been overcome, in order to change the public prospective of WAP. Social Impact The UK economy achieving sustained economic growth and increasing employment levels have had a positive impact on the social behaviour of consumers. ...read more.

All the departments including from top management to others, such as finance, research and development, purchasing, manufacturing and accounting have an impact when making decision about marketing. Marketing managers are supposed to work closely with all the departments to carry the marketing plan for the company. Thus, if they all work in harmony, then they are able to provide superior consumer value and satisfaction. Suppliers The suppliers of the mobile industry have a considerable influence as they consist of those firms which supply resources needed by the company and its competitors to make mobile phones. That is, all the IT technicians, specialists, machinery providers have a considerable influence by supplying the industry all the components of the goods in time. Further, continuous supplies of components have to planned and guaranteed for the mobile phones makers to supply customers in time. However, rising supply costs may force mobile price increases that can harm the company's sales volume.6 Conclusion In combination with a PEST-Analysis, which reveals for changes that has been occurring within the UK mobile industry through external impact, the Micro environmental factors can reveal insights about the potential future attractiveness of the mobile industry. After the analysis of current and potential future state of the five competitive forces, managers can search for options to influence these forces in the mobile industry's interest. The corporate strategy developed by the managers for the specific needs of companies would shape the mobile industry such that it becomes more competitive, however working together to make the industry more attractive and hence achieve higher profits. ...read more.