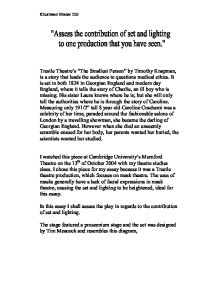 Assess the contribution of set and lighting to

Trestle Theatre's "The Smallest Person" by Timothy Knapman, is a story that leads the audience to questions medical ethics. It is set in both 1824 in Georgian England and modern day England, where it tells the story of Charlie, an ill boy who is missing. His sister Laura knows where he is; but she will only tell the authorities where he is through the story of Caroline. Measuring only 191/2" tall 8 year old Caroline Crachami was a celebrity of her time, paraded around the fashionable salons of London by a travelling showman, she became the darling of Georgian England. However when she died an unseemly scramble ensued for her body, her parents wanted her buried, the scientists wanted her studied. I watched this piece at Cambridge University's Mumford Theatre on the 13th of October 2004 with my theatre studies class. ...read more.

This was made possible because the design was very neutral, which made it possible to be used with any time period as it did not affect the atmosphere created by the other conventions. On that note I do not believe that the set featured a specific genre because it was not portrayed as having one and instead a neutral role and theme, however perhaps that was its genre, to be cold and neutral? The lighting was designed by Ian Saunders, and I believe that it was very basic in its role of creating atmosphere, almost poor. It mainly consisted of warm yellow, white and cold blue Fresnels, which were used to portray either a specific time-period or scene of great tension and emotion. There was also the use of a backlight which was used either to tell a story from the past or as an ...read more.

The contribution of the set and lighting together, however was very effective. The lighting and set helped greatly to create atmosphere in certain scenes by working together in harmony. One such scene was when Dr. Gilligan and Caroline set asail to England for her 'treatment'. The actor and puppet used the very top of the set as a boats deck and hull, and the use of that cold blue Fresnel helped one to picture a scene of a lone boat sailing across the cold Atlantic Ocean. In conclusion, the contribution of set and lighting in the play 'The Smallest Person' on their own was basic and failed to create an atmosphere that could affect the audience. However together, there was quite different effect as the two conventions worked together to find an equilibrium of their imbalances and achieve a good affect upon the audience. Khushwant Bhakar 12Jr ...read more.