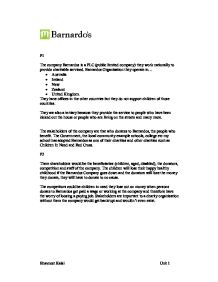 P1 The company Barnardos is a PLC (public limited company) they work nationally to provide charitable serviced. Barnardos Organisation they operate in... * Australia * Ireland * New * Zealand * United Kingdom. They have offices in the other countries but they do not support children of those countries. They are also a tertiary because they provide the service to people who have been kicked out the house or people who are living on the streets and many more. The stakeholders of the company are that who donates to Barnardos, the people who benefit. The Government, the local community example schools, college etc my school has adopted Barnardos as one of their charities and other charities such as Children In Need and Red Cross. P2 There shareholders would be the beneficiaries (children, aged, disabled), the donators, competition and staff of the company. The children will lose their happy healthy childhood if the Barnardos Company goes down and the donators will lose the money they donate, they will have to donate to no cause. The competitors could be children in need they lose out on money when persons donate to Barnardos get paid a wage or working at the company and therefore have the worry of loosing a paying job. ...read more.

Owners and shareholders as stakeholders - Owners and shareholders have a common interest; they each invest money in the business. If it is successful they will make more money if it is not they will lose money. Shareholders hope to make money in two ways if the business does well then the value of their shares will increases. They could then sell their shares and take profit or keep them and hope they would increase further. The danger is that the shares could fall in value on which case the shareholders would lose money. Shareholders also expect the company to pay a dividend which is usually twp pence per share twice a year. Owners like to see their profit increasing and the value of their business like innocent smoothies rising. Individual shareholder power to influence a company decision depends upon two things which are... 1. How much money shareholder has invested. All shareholders have one vote for each share. Small investor may own only a few shares in a company, so their influence on the company is small. Large institutional shareholders such as a pension fund or insurance company may hold several hundred thousands shares, and they can use their votes to influence the way a company is run . ...read more.

Employers associations - these are the employer's equivalent of the trade union. These bodies represent the interest of Innocent smoothies groups of employers such as there employers association representing the interest of the employer's specific industries. Competitors - if the Innocent smoothies company get bankrupt this means that they will have more chance of taking customers away from their business. Pressure groups as stakeholders - pressure groups an organised group of people which aim to influence more powerful bodies such as the government, local authorises or large businesses. Some of these groups are very large and operate internationally. There are thousands of pressure groups in Britain including... * Trade union which lobby the government about the causes of workers. * Most charities example shelter and the NSPCC * Many famous environment groups' example Greenpeace, friends of the earth and the world fund of nature. Suppliers - Some suppliers dislike being dependent on business buyers they extend their operations to sell direct to the final consumer for example many breweries own their own pubs and restaurants and petrol companies have their own petrol stations. Equally some business buyers don't like being dependent on suppliers. In this case they may decide to produce their own supplies for example Innocent smoothie's product their own natural drink ?? ?? ?? ?? Bhavneet Kalsi Unit 1 ...read more.