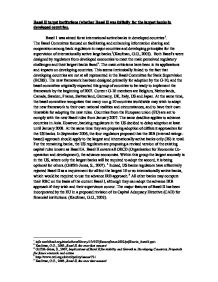 Basel II target institutions (whether Basel II was initially for the largest banks in developed countries. Basel 1 was aimed for at international active banks in developed countries1. The Basel Committee focused on facilitating and enhancing information sharing and cooperation among bank regulators in major countries and developing principles for the supervision of internationally active large banks.2(Kaufman, G.G., 2003). Both Basel's were designed by regulators from developed economies to meet the main perceived regulatory challenges and their largest banks faced3. The main criticisms have been in its applications and impacts on developing countries. This seems intrinsically linked to the fact that developing countries are not at all represented in the Basel Committee for Bank Supervision (BCBS). The new framework has been designed primarily for adoption by the G-10, and the basel committee originally expected this group of countries to be ready to implement the framework by the beginning of 2007. Current G-10 members are Belgium, Netherlands, Canada, Sweden, France, Switzerland, Germany, UK, Italy, US and Japan. At the same time, the basel committee recognizes that many non g-10 countries worldwide may wish to adapt the new framework to their own national realities and circumstances, and to have their own timetable for adopting the new rules. ...read more.

And more efficient because bank business decisions will be more closely based on the underlying economics of transactions rather than the regulatory distortions created by the existing rules7. (Egan, B., 2003). Consistent with the move away from the one size fits all approach, Basel II is designed to be flexible and to be able to reflect the complexity of the business undertaken by specific banks. In a small bank, for example, lending decisions may be made largely on the judgement of the lending officer. Banks can decide where on the complexity scale they wish to operate. A small ADI, such as a credit union, can happily exist with a small number of simple products. Operating in its own market it can be competitive and innovative, while maintaining a simple risk profile that can be adequately protected against with simple risk management strategies and practices. At the other extreme, a sophisticated global bank providing a broad suite of products will require complex risk measurement practices and strategies. Basel II makes available a capital solution for the small banks offering a small number of uncomplicated products, a solution for the most complex banks and a solution for those banks in between. ...read more.

58. Given resource constraints and other priorities, it should be neither surprising nor inappropriate for these timetables, particularly in non-G10 countries, to extend beyond 2006. That said, supervisors should consider implementing key elements of the supervisory review and market discipline components of the New Accord even if the Basel II minimum capital requirements will be implemented after year-end 2006. 59. Many national supervisors have already begun to plan for the transition to Basel II. To assist in this process, the Committee has asked a group of supervisors from around the world, with IMF and World Bank participation, to develop a framework for assisting non-G10 supervisors and banks in the transition to both the standardised and foundation IRB approaches of the New Accord. The Committee believes that continued co-operation along these lines is essential to ensuring a successful transition to the New Accord. 1 info.worldbank.org/etools/docs/library/154927/financeforum2002/pdf/laurin_baselii.ppt - 2 Kaufman, G.G., 2003.,Basel II, the roar that moused 3 Griffith-Jones, S., 2007, Implications of Basel II for stability and Growth in Developing Countries, Proposals for future research and action 4 http://www.cml.org.uk/cml/policy/issues/721 5 Kaufman, G.G., 2003.,Basel II, the roar that moused 6 Cornford, A., 2005, The global implementation of Basel II: Prospects and outstanding problems 7 Egan, B., 2003, Monitoring risk in the financial system, Australian Prudential Regulation Authority ?? ?? ?? ?? ...read more.