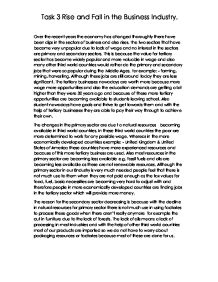 Task 3 Rise and Fall in the Business Industry.

Over the recent years the economy has changed thoroughly there have been dips in the sectors of business and also rises. The two sectors that have become very unpopular due to lack of wage and no interest in the sectors are primary and secondary sectors. This is because the value for tertiary sector has become widely popular and more valuable in wage and also many other third world countries would rather do the primary and secondary jobs that were so popular during the Middle Ages. For example: - farming, mining, harvesting. Although these jobs are still around today they are less significant. The tertiary businesses nowadays are worth more because more wage more opportunities and also the education demands are getting a lot higher than they were 30 years ago and because of these more tertiary opportunities are becoming available to students leaving school. Also student nowadays have goals and thrive to get towards them and with the help of tertiary businesses they are able to pay their way through to achieve their own.

The changes in the primary sector are due t o natural resources   becoming available in third world countries. In these third world countries the poor are more determined to work for any possible wage. Whereas in the more economically developed countries example: - United Kingdom & United States of America these countries have more experienced resources and because of this more tertiary business are used. Also most resources in the primary sector are becoming less available e.g. fossil fuels and oils are becoming less available as these are not renewable resources. Although the primary sector in our 8ndustry is very much needed people feel that there is not much use to them when they are not paid enough as the tax values for food, fuel, basic necessities are becoming very hard to adjust with and therefore people in more economically developed countries are finding jobs in the tertiary sector which will provide more money.

The reason for the secondary sector decreasing is because with the decline in natural resources for primary sector there is not much use in using factories to process these goods when there aren’t really anymore  for example the cut in furniture due to the lack of forests. The lack of oils means a lack of processing in most industries and with the help of other third world countries most of our products are imported so we do not have to worry about packaging resources or factories because most of these are done for us. 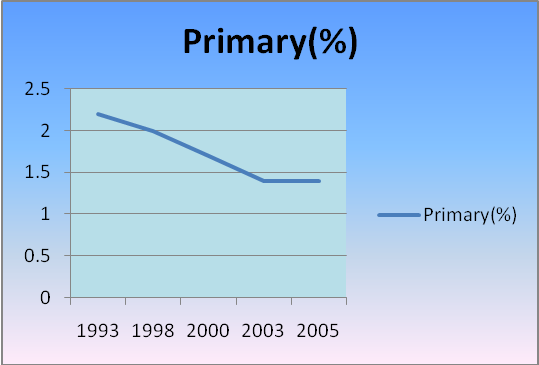 From this graph we can tell the decrease in employment sector has thoroughly declined due to the rise in tertiary employment during 2003 and 2005 the employment level has steadied I think this is because many materials from abroad are arriving into Britain. 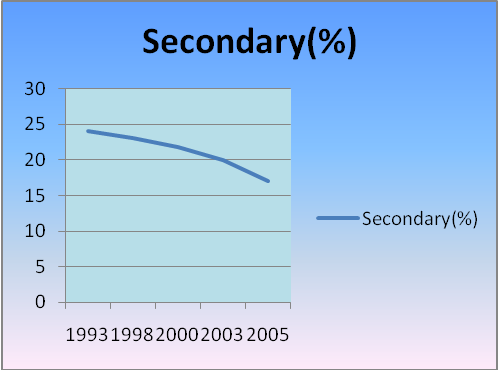 The employment rate is a lot more but decreasing very slowly and in low numbers I think that this is due to more tertiary employers are being wanted and also the value for secondary jobs isn’t that much.

The analysis is sound, but in my opinion there are plenty of places for improvement! I would've liked to have seen a solid introduction which explained the difference in primary, secondary and tertiary production. The essay asserts that the tertiary sector has higher wages. In my experience, a simple explanation of the fact tertiary industries (financial services, etc) tend to have have higher profits, meaning they can offer higher wages, would add an extra dimension to much of this essay. I did like the comment that students strive to be in the top of the tertiary sector. However, once again this could be elaborated upon. I would've showed that the top graduate destinations in the eyes of students are all service-based, and this is due to the better working conditions, higher wage, and the stigma that manufacturing is no longer trendy. When discussing foreign countries, I would advise anyone to mention comparative advantage. Although this is a higher level concept, I would explain that foreign countries such as China have a labour-intensive comparative advantage, leading them to become more competitive in the primary sector. A key concept isn't included in this essay is competition: ultimately the UK is no longer competitive in primary and secondary sectors, and this should be addressed in the essay. I would've liked to have seen the upwards trend in the tertiary sector graphically displayed.

This essay is written well, but needs a stronger structure. The introduction doesn't clearly explain the terms involved and there is no conclusion weaving together the argument. A few times there are slips in grammar and spelling - quality of written communication is assessed, so it is key that students proof read their work! Too often this essay says "I think". Try and avoid this, but instead find evidence which allows you to be more assertive.