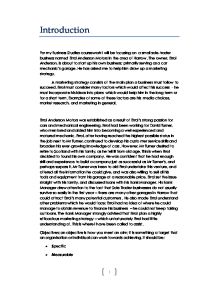 Introduction For my Business Studies coursework I will be focusing on a small sole-trader business named Errol Anderson Motors in the area of Harrow. The owner, Errol Anderson, is about to start up his own business; primarily serving as a car mechanic's garage. He has asked me to help him draw up a marketing strategy. A marketing strategy consists of the main plan a business must follow to succeed. Errol must consider many factors which would affect his success - he must incorporate his ideas into plans which would help him in the long term or for a short term. Examples of some of these factors are his media choices, market research, and marketing in general. Errol Anderson Motors was established as a result of Errol's strong passion for cars and mechanical engineering. Errol had been working for David Turner, who mentored and aided him into becoming a well experienced and matured mechanic. Errol, after having reached the highest possible status in the job next to Mr Turner, continued to develop his customer service skills and broaden his ever-growing knowledge of cars. However, Mr Turner desired to retire to Scotland with his family, as he fell ill from old age. This is when Errol decided to found his own company. He was confident that he had enough skill and experience to build a company just as successful as Mr Turner's, and perhaps surpass it. Mr Turner was keen to aid Errol undertake this venture, and offered all the information he could give, and was also willing to sell all his tools and equipment from his garage at a reasonable price. Errol set the issue straight with his family, and discussed loans with his Bank Manager. His Bank Manager drew attention to the fact that Sole Trader businesses do not usually survive so easily in the first year - there are many other garages in Harrow that could attract Errol's many potential customers. ...read more.

There is no problem about it being up to date. It gives an insight into the market Errol is in, and this can be used to gain the upper hand over competitors as they cannot take the research from Errol. I believe that the most appropriate marketing research technique that Errol could undertake for initial research is to distribute a questionnaire. I think that this technique can prove to be effective in many ways while still suppressing costs for Errol. As aforementioned, Errol is a sole trader and of course has only one source of finance - from within the organisation; he cannot sell shares on the stock market (nor would he want to if he could, since it is a small company and limited to the area of Harrow). As I have stated, using a questionnaire to gain individual information proves to be very suitable for his marketing budget because printing in bulk is cheap and quick. Employing a questionnaire as a technique would be more cost-effective than using posters, due to the costs which are derived from the amount of colour ink used, paper types, and the size of the overall poster. Using a questionnaire is also very practical for Errol since he can constrain and tailor the questions to find out the exact and relevant information he needs for the company. The geographical area in which the questionnaires are distributed is obviously controlled; door-to-door, post, or hand out questionnaires would be within a set area in an attempt to target only the residents of Harrow and perhaps some of Wembley (as he has a small business and therefore only has one branch). Questionnaires will be systematic to analyse as everyone does the same one. Although it may be time consuming to study because of open questions which require individual answers, the end result will aid Errol in the long term by providing him with the answers he wants to the questions he assigned. ...read more.

If they do not meet their qualities and description of use, the consumers may go to the ASA and again, Errol may face bad publicity in the area and dispel potential customers before the business is up and running. The ASA (Advertising Standards Authority) is an SRO (Self Regulatory Organisation) of the advertising industry. Their responsibility is to enforce a code of conduct (the rules of the British Code of Advertising, Sales Promotion and Direct Marketing) for advertising that advertisers must adhere to. When consumers feel that adverts have broken the rules, they contact the ASA, who then investigate the complaint and can request the advertiser to pull-back the adverts or change it so that it corresponds to the law. Errol needs to be aware of the ASA the most because they are the affiliation that deals with the companies who abuse the laws of advertisements. If the ASA ends up on Errol's back, he would create a bad image of himself, and again, he would lose customers. A very recent example of the ASA's actions against someone breaching the advertising laws occurred on 12th February 2007, on "Dr" Gillian McKeith. Gillian McKeith is the presenter on the show "You Are What You Eat". She had recently released a book and launched a promotional campaign, using the title "Doctor". The ASA deemed this unlawful after conducting an investigation that revealed that she had indeed achieved a distance learning PhD, but her adverts did not mention that she was not a medical doctor. The ASA believed this rendered the adverts as misleading as the college she attended for attaining her PhD "was not accredited by any educational authority when she took the course." This is a prime example of the ASA's function, and the article has been attached in the appendices section at the end of this coursework. This may well be a warning to Errol, as he must also be careful with the services provides, and the degree of quality he says he can provide must be met. ...read more.