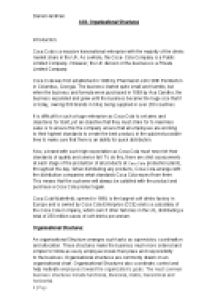 ﻿Daniel Hardman. A03- Organisational Structures Introduction: Coca Cola is a massive transnational enterprise with the majority of the drinks market share in the UK. As a whole, the Coca- Cola Company is a Public Limited Company- However; the UK division of the business is a Private Limited Company. Coca Cola was first established in 1886 by Pharmacist John Stith Pemberton in Columbus, Georgia. The business started quite small and humble, but when the business and formula were purchased in 1889 by Asa Candler, the business expanded and grew until the business became the huge size that it is today, owning 500 brands in total, being supplied in over 200 countries. It is difficult for such a huge enterprise as Coca Cola to set aims and objectives for itself, yet an objective that they must strive for to maximise sales is to ensure this the company ensure that all employees are working to their highest standards to create the best product, in the quickest possible time to make sure that there is an ability for quick distribution. Also, a brand with such high expectation as Coca Cola must never let their standards of quality and service fall. To do this, there are strict assessments at each stage of the production of all products at Coca Cola production plants, throughout the day. When distributing any products, Coca Cola arrange with the distribution companies what standards Coca Cola expect from them. This means that the customer will always be satisfied with the product and purchase a Coca Cola product again. Coca Cola Wakefield, opened in 1989, is the largest soft drinks factory in Europe and is owned by Coca Cola Enterprise (CCE) and is a subsidiary of the Coca Cola Company, which own 5 other factories in the UK, distributing a total of 250 million cases of soft drinks per annum. Organisational Structures: An organisational Structure arranges such tasks as supervision, coordination and allocation. ...read more.

If changing to any other type of structure is unlikely state why. What could Coca Cola Wakefield consider doing in order to save costs? What would this be doing to the structure? To save costs, Coca Cola may wish to follow my idea of making the business flatter- this could be done by delayering one layer of Coca Cola Wakefield which they consequently would, of course, not have to pay the salaries for anymore. Another, more drastic, approach to the altering of Coca Cola Wakefield?s structure could be the matrix structure pictured above. The workload is shared much more evenly in this new restructure which means that, due to the fact that I have removed some roles from the structure, it is not only the Shift Team Leaders that have to work harder (unlike the flatter hierarchical restructure). The ?Manufacturing Manager Large PET? now has responsibility for just one ?Productivity Team Leader? as oppose to eight- lowering both his responsibility and authority. This now means that he/she can now focus all of his/her capacity onto that one employee because The benefits of this new structure are that both the span of control and chain of command are smaller meaning that managers can be more personal to their subordinates and orders and messages can be delivered much more simply, effectively and quicker. Nevertheless, there are some drawbacks to this new matrix structure. Because each team has more freedom in a matrix structure, the teams can be less controlled and more difficult to supervise. Also- because there is more of a focus on project teams in this type of structure, costs for new managers may have to be put in place. Ultimately, I believe that my first restructure- the flatter, hierarchical one is the most profitable to Coca Cola Wakefield as matrix structures have been known to fail in businesses smaller than Coca Cola Wakefield due to the fact that matrix structures are not capable of structuring large businesses. ________________ | Page ...read more.