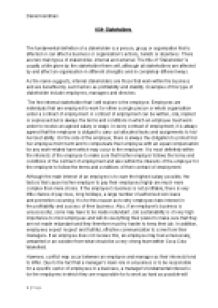 ﻿Daniel Hardman. A04- Stakeholders The fundamental definition of a stakeholder is a person, group or organisation that is affected or can affect a business or organisation?s actions, beliefs or objectives. There are two main types of stakeholder- internal and external. The title of ?Stakeholder? is usually a title given by the stakeholder them self, although all stakeholders are affected by and affect an organisation in different strengths and in completely different ways. As the name suggests, internal stakeholders are those that work within the business and are benefited by such factors as profitability and stability. Examples of this type of stakeholder include employees, managers and directors. The first internal stakeholder that I will explore is the employee. Employees are individuals that are employed to work for either a single person or whole organisation under a contract of employment. A contract of employment can be written, oral, implied or expressed but is always the terms and conditions in which an employee must work under to receive an agreed salary or wage. In every contract of employment, it is always agreed that the employee is obliged to carry out allocated tasks and assignments to his/her best ability. On the side of the employer, there is always the obligation to protect his/her employee from harm and to compensate their employee with an equal compensation for any work-related harm which may occur to the employee. It is most definitely within the interests of the employee to make sure that his/her employer follows the terms and conditions of the contract of employment and also within the interests of the employer for the employee to follow the terms and conditions of their contract of employment. Although the main interest of an employee is to earn the highest salary possible, the factors that cause his/her employer to pay their employees highly are much more complex than mere choice. If the employee?s business is not profitable, there is very little chance of pay rises, long holidays, a large number of authorised sick leave and promotion occurring. ...read more.