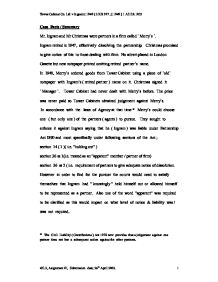 Case Facts / Summary Mr. Ingram and Mr Christmas were partners in a firm called ` Merry`s `. Ingram retired in 1947, effectively dissolving the partnership. Christmas promised to give notice of this to those dealing with firm. No advert placed in London Gazette but new notepaper printed omitting retired partner's name. In 1948, Merry`s ordered goods from Tower Cabinet using a piece of `old` notepaper with Ingram's ( retired partner ) name on it. Christmas signed it ` Manager `. Tower Cabinet had never dealt with Merry`s before. The price was never paid so Tower Cabinets obtained judgement against Merry`s. In accordance with the laws of Agency at that time * Merry`s could choose one ( but only one ) of the partners ( agents ) to pursue. They sought to enforce it against Ingram saying that he ( Ingram ) was liable under Partnership Act 1890 and most specifically under following sections of the Act ; section 14 ( 1 )( i.e. "holding out" ) section 36 ss 1(i.e. treated as an "apparent" member / partner of firm) ...read more.

" As this was Tower Cabinet's first transaction with Ingram, which had occurred over eight months after his retirement, it could not be argued that the third party had any previous knowledge or information that Ingram had been a partner of the firm. Apparent in section 36(3) meant " appeared to be members to persons dealing with the firm " Therefore " apparent" could not apply to members who were not known to the person ( third party ) concerned to be a partner of the firm. This latter principal was applied in this case as Ingram was not known by Merry`s prior to his retirement and there was no holding out. The case of Graham v Hope ( 1792 ) Peake 208 set out that, in the case of persons dealing with the firm to whom the retiring partner was not known as a partner, no notice is necessary. However if Tower Cabinet had dealt with Mr Ingram previously as a partner of Merry`s and had not received adequate notice of his retrial they could have sought to rely upon the fact that they had acted in good faith therein binding the partnership. ...read more.

Another affect of this case applies to retired partners who die in that there are obvious implications for the estate of the deceased in that definition of "apparent" would dictate if the estate could be held liable or not. The principals and judgement expounded in the case of Tower Cabinets Ltd v Ingram [1949]2 KB 397 remains central to present day partnership law and it has served to clarify and strengthen the Partnership Act 1890. Bobliography / Points of reference Nocole Busby, Bryan Clark, Richard Mays, Roderick Paisley and Paul Spink. ( 2000 ), Scots Law, A Students Guide Ann Holmes and David Kelly, ( 1997 ), Business Law, second edition Professor Ivamy, ( 1981 ) , Underhill`s Principles of the Law of Partnership. Nicole Busby ( 2001 ), Business Law II, The Law of business organisations, 43L2 & 4L92, Course Manual, Spring Sumester 2002. Internet Resources www.westlaw.com Tower Cabinet Co. Ltd v Ingram ( 1949 ) 2 KB 397 ; [ 1949 ] 1 All ER 1033 1 43L2, Asignment #1, Submission date; 26th April 2002. ...read more.