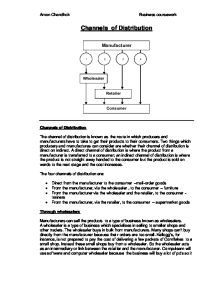 However this means that businesses like Tesco's will need to buy in bulk order from the manufacturer this maybe difficult for smaller businesses because its harder for small businesses to avoid holding lots of stock. Manufacturers may also reach smaller retailers by using sales force or sales team, this is a group of people in a business which specialise in selling its goods or services, the sales force will visit retailers and sell the products, and some businesses even use telesales where they call retailers and try and sell products over the phone. Manufacturers try and take the route of selling to retailers because manufacturers get better consumer feedback about the products, to get as many retailers to become a customer of the manufacturer, businesses will need to advertise to make sure sales force works. Another way manufactures can get products sold to retailers is by trade fair which is a type of market where manufacturers have stands and sell to retailers who visit the fair to buy stock to sell to consumers. An example of a trade fair is exhibition canters like the National Exhibition centre. Through agents An agent is an individual or business which sells a product on half of another business and receives a commission or payment for doing so, are given the rights to sell products by the manufacturer. Agents are similar to wholesalers and act as intermediaries, the advantage of having agents is that the cost of marketing the products are paid by the agent; this means that manufacturers have less costs and the marketing budget might not be large enough for the business to sell overseas. Agents also get paid a percentage of the value of every sale made, in other words this known as commission. Commission is a payment made to an agent to return for the sales of products. Directly to the consumer Direct to the consumer is very popular, this is because direct to mail is the fastest channel and is often cheapest for consumers. ...read more.