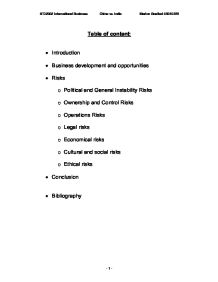 China or India? Many companies ask themselves this question. Due to saturated markets, increasing costs and low growth rates in the developed western countries, going to Asia might be the only possibility to sustain healthy growth rates

Table of content: * Introduction * Business development and opportunities * Risks o Political and General Instability Risks o Ownership and Control Risks o Operations Risks o Legal risks o Economical risks o Cultural and social risks o Ethical risks * Conclusion * Bibliography Introduction: China or India? Many companies ask themselves this question. Due to saturated markets, increasing costs and low growth rates in the developed western countries, going to Asia might be the only possibility to sustain healthy growth rates. With more than one billion people living in India and China respectively, including a huge middle class and growth rates are more than double as in western countries there are huge opportunities for companies. The benefits of globalization made it possible to enter these markets. But these opportunities come also along with risks, therefore it is vital to have a closer look at these two countries to identify these risks and decide then which country fits to the company and where you think you can handle the intercultural differences best. Business development and opportunities: The key drivers that made the globalization possible were also in favor of the business development in China and India. The evolution to more democratic systems and open market systems enabled the opening up of the market and the falling barriers made it possible to enter these markets. Technological advances especially in the communication and transport sector made it profitable to ship products back and forward and outsource services. Western companies are actually forced to go abroad to make profits because of saturated markets in their home markets or in the western hemisphere. Often they invested a lot on R&D and only if they are global player the gain sufficient returns on investments. They also want to take advantage of the low cost resources and the expanding market demand in China and India. The worldwide demand is more homogeneous than ever before. ...read more.

McDonald is an example of a company that had difficulties. Because it did not have the right 'guanxi', it lost a case against the government and had to move out of a profitable location. China is a member of the WTO since December 11th 2001, but at the moment it does not enforce prosecution of infringements against intellectual property rights rigorous. That is the reason why piracy is very common in China. 'It is one of the worst offenders against IPR and has a piracy rate of 92%' (Hill, 2005, 55). India has because of its colonial past, a legal system that is based on the British common law. It is able to settle 'sophisticated and complex cases' (Hill 2005). But due to many cases there can be delays. India is member of the WTO since January 1st 1995 and Intellectual Property Rights are respected also enforceable at court. Its IPR are compatible to the TRIPS agreement. But for patens it is different, they are prohibited in areas that include the use of food, medicine and drugs. That allows western medicines and drugs to be reproduced. There are still laws that make it difficult for doing business in India; Hill (2005) shows an example of a law that makes it difficult for companies with over a 100 employees to fire people at all. Companies have to make sure that they understand the concept of law and enforcement in the country. Then they should adapt to these conditions and respect them. For western businesses it might be easier to rely on a fixed set of laws, which they are used to. India offers this environment. You can rely on this, without being worried how they might be affected by connections. It gives foreign investors security and they do not need to worry about their attitude towards corruption. A big advantage is as well that Intellectual Property Rights are respected. ...read more.

'India has created world class companies that can often compete with the best in the West, often on the cutting edge of software, pharmaceuticals and biotechnology' (Power2004) and these are the technologies of the future. That means India will be competitive in the future and the growth will be stable then. It shows that India is future orientated. Therefore is 'India better placed than China for further growth' (Power2004). 'If China will be the world's workshop, India will be its laboratory' (Bennhold 2004). Omen for success are also good bond markets and 'better institutions and corporate governance' (FAZ) The reduced risks: A major advantage for India is that is a democracy. There are no risks of revolutions and insurrections. That IPR are protected is also a good way to attract and ensure high tech investment in the future. An advantage is also that India is respecting the human rights. This is getting more and more important for multinational companies, because their image will be affected and consumers all over the world are getting more and more sensible for this topic. But that does not mean that companies should not be careful in entering the Indian market. There are many pitfalls. Companies should conduct a careful market research and be sensible to special circumstances in the market. They should not overestimate the opportunities and the potential market and respect the local tastes, social and cultural differences. To choose the right entry strategy is also a major factor of success. I would recommend if the company has enough resources to set up a wholly owned subsidiary. This will ensure that you will have control and no unwanted technology transfer. Quality standards will be ensured, tariffs and trouble with uncommitted partners avoided. Anyway it should be ensured that there are enough locals under acceptable conditions employed, also in the management level. This will help the company to respond to the specialties of the market and shows that it is aware of its social responsibilities. ...read more.