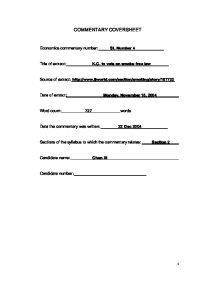 Cigarettes are demerit goods which cause negative externalities. B

COMMENTARY COVERSHEET Economics commentary number: SL Number 4 Title of extract: K.C. to vote on smoke-free law Source of extract: http://www.ljworld.com/section/smoking/story/187733 Date of extract: Monday, November 15, 2004 Word count: 727 words Date the commentary was written: 22 Dec 2004 Sections of the syllabus to which the commentary relates: Section 2 Candidate name: Chen Xi Candidate number: Commentary Number 4 A market represents the private forces of demand and supply. Consumers aim to consume goods and services with lower prices and greater quantities while producers want to maximize their profits. A market diagram uses demand and supply curves to show the relationship between market demand and supply. These demand and supply curves are labeled as "private demand" and "private supply", that is, the private benefits and the private costs. But those private activities always affect others, both positively and negatively. Those positive and negative effects are not represented in the market model; they are external to the market, known as externalities1. ...read more.

Cigarettes are demerit goods which cause negative externalities. Because of their characters, producers get huge profits from them. So they are overprovided in the market, just like alcohol. The consumption of cigarettes always has negative effects on other people. It causes cancer, and may cut down human life-span. In order to internalize the negative externalities, government should interfere in the market. There are several ways to do that. One method government may employ is negative advertising to reduce private demand for demerit goods. People will consider the bad effects caused by demerit goods before purchasing or reduce the consumption on such goods that means private demand curve will shift to right. On the other hand, the supply curve shifts to left because of the costs of bad effects added to the factor costs of the products. The transaction of that goods decreases. After government applying negative advertising to public, the total transaction will decrease again because demand decreases. ...read more.

When the quantity supplied turns to zero, there will no quantity transacted in the market anymore. In the extract, The Kansas City Council was expected to vote on a smoke-free law that would ban smoking in most workplaces and a host of public places, including bowling alleys, pool halls and stores. They use legislation rather than taxes. The anti-smoking campaign seems serious in this city. I think legislation is not the best way to ban smoking in this case. Since most smokers cannot give up cigarettes in short-term. It is difficult for them to obey the law. On the other hand, people may rebel against the law; the bad effects cannot be diminished. So, in order to solve market failure caused by smoking, negative advertising would be a better choice, which means let residents know the disadvantages of smoking and willing to abstain it by themselves. (727 words) 1 An effect of consumption or production which is not taken into account by the consumer or the producer and which affects the utility or costs of other consumers or producers. ?? ?? ?? ?? 1 ...read more.

This essay engages well with the question. I liked how there is a clear progression from showing knowledge and understanding of markets, then onto how they can fail, and then some analysis and evaluation of which policies are most effective ...

This essay engages well with the question. I liked how there is a clear progression from showing knowledge and understanding of markets, then onto how they can fail, and then some analysis and evaluation of which policies are most effective to correct the market failure. It is crucial to show this progression, as this is how markers will allocate marks. Without analysis you cannot gain marks for evaluation, so it was good to see numerous diagrams showing changes and shifts.

The analysis in this essay is strong. I liked the introduction, incorporating ideas about market forces. This shows a solid understanding of how market forces work, allowing the groundwork to analyse why market failure occurs. If I was doing this essay, I would've mentioned how demand and supply determine price and quantity at equilibrium, as this is not explicitly explained here. The diagrams included are strong, showing clear understanding that a demerit good should cause a left shift in supply due to the external costs. What I particularly like is the explanation of the diagram, for example saying "The private supply curve shifts to left. When the supply curve shifts from SMPC to SMSC, the market prices increase from PP to PS and the quantity traded is reduced from QP to QS". This is an easy way to pick up marks, as it shows an understanding of the concept and the skills to not only draw a diagram, but to explain the changes. Technical concepts are explored, such as internalising the negative externality. Using such jargon will gain credit. I liked how there was a discussion of taxation and regulation of the cigarette market, making a justified judgement to which method is more viable. It is nice to see ideas drawn upon which aren't necessarily economical, mentioning the difficulty of giving up smoking.

The structure of this essay is strong. As mentioned earlier, the progression from knowledge to analysis and then evaluation makes it easy for the examiner to allocate marks. It also makes for a more convincing argument, as it shows you understand the concepts and why they are important in determining which policies are more effective in correcting market failure. There are a few slips in spelling such as "drown" instead of "drawn" which could easily be fixed with a proof read.