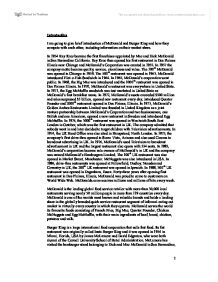 Introduction I am going to give brief introduction of McDonald and Burger King and how they compete with each other, including information on their market share. In 1954 Ray Kroc became the first franchisee appointed by Mac and Dick McDonald in San Bernardino California. Ray Kroc then opened his first restaurant in Des Plaines Illinois near Chicago and McDonald's Corporation was created in 1955. In 1957 the company motto became quality, service, cleanliness and value. The 100th McDonald was opened in Chicago in 1959. The 500th restaurant was opened in 1963. McDonald introduced Filet-o-Fish Sandwich in 1964. In 1965, McDonald's corporation went public. In 1968, the Big Mac was introduced and the 1000th restaurant was opened in Des Plaines Illinois. In 1970, McDonald's restaurant was everywhere in United State. In 1971, the Egg McMuffin sandwich was test marketed in United State as McDonald's first breakfast menu. In 1972, McDonald's assets exceeded $500 million and sales surpassed $1 billion, opened new restaurant every day, introduced Quarter Pounder and 2000th restaurant opened in Des Plaines, Illinois. In 1973, McDonald's Golden Arches Restaurants Limited was founded in United Kingdom as a joint venture partnership between McDonald's Corporation and two businessmen, one British and one American, opened a new restaurant in Sweden and introduced Egg McMuffin. In 1974, the 3000th restaurant was opened in Woolwich South East London in October, which was the first restaurant in UK. The company admitted that nobody went in and later decided to target children with Television advertisements. In 1974, the UK Head Office was also sited in Hampstead, North London. In 1975, the company's first drive-thru opened in Sierra Vista, Arizona and also used Cinema to broadcast advertising in UK. In 1976, McDonald's used Television to broadcast advertisement in UK and the largest restaurant also opens with 334 seats. In 1983, McDonald's corporation became sole owners of McDonald's in UK and the company was named McDonald's Hamburgers Limited. ...read more.

Merchandising/Point of Sales: McDonald and Burger King have the same merchandising/point of sales techniques because both store using window display, displaying products that are most demanded or products on promotion. Public Relations: McDonalds used to have good public relations until 2005 when the company received public complaints that the company's food is causing obesity in the United State. Because of this complaint, the company had to introduce some healthy meals by introducing salads and fruits. Ever since then the company have been using sales promotion and advertising to have control of the content and presentation of their message. The company tries to forward message that they value and listen to their customers' needs and requirements and prepared to change their menu in order to gain customers loyalty, whereas Burger King is yet to receive any public complaints about its products and keep to providing good customer services and reduce queues. Part 2 Situation Analysis In 1999, sales of fast food increased by 6.2% and the market was worth around �7 billion. Expansions by leading brands have continued to be the main market drive even though a lot of the new outlets are smaller. Around 75% of adults visited fast food for takeaway but only 47% of them eat in. Sandwiches have the largest share of fast food and the market share for sandwiches have been increasing in the last years. Burger have the second largest share of fast food and the others include pizzas, chicken, fish and chips. There are five companies that dominate the fast food restaurant, these are: McDonalds, Burger King, KFC, Pizza Hut and Subway. I will carry out questionnaires to find out more information about existing market for sandwiches. 1. Gender Female Male 2. Age 16-20 21-30 31-40 40 and over 3. Occupation Student Professional Other 4. Marital status Single Married Others 5. What is your favourite fast food? Kebab Pizza Fish & chips Chinese Others 6. Which fast food restaurant do you visit? KFC McDonald Pizza Hut Others 7. ...read more.

costs due to poor location, local authority refusing plans for future building expansion, increasing interest rates which means borrowing repayments will increase and existing product become unfashionable or unpopular. McDonald's biggest threat is Subway because they have a reputation for offering high quality and healthy food. Subway's main product is sandwich and this is where most of their sales come from. Promotional mix I am going to use the following types of promotion to promote my goods, these include: newspapers, direct mail, sales promotion and merchandising. Newspapers: the reason I chose newspaper is because it is cheap and will be distributed locally. Local and regional newspapers attract a lot of readers despite the competition from national newspapers. Direct mail: is convenient for the respondent in terms of having promotional material delivered to doorstep. My direct mail will come in form of leaflets, which will be distributed locally. Using this method guarantee that consumers will definitely receive the leaflets so they will be aware of the products and promotion. Leaflet is also a cheap method of promotion. Distributing leaflets is a very cost effective method but a lot of it tends to be destroyed and ending up in the bin, which means wastage levels, will be high but the way people also respond seems to be high. Distributing leaflets will cost time and labour. Sales promotion: will come in form of special offers and vouchers printed in newspapers and leaflets. Special offers will be for a limited period only in order to encourage sales. Sales promotion can lead to price war depending on reaction of competitors. Customers can become dependence once used to sales promotion and once products returns to its normal price, customers will no longer see it as value for money. Merchandising: good merchandising at point of sale can turn customers' desire into prompt action when they go inside the restaurant and they can also notice the displays and posters and this will encourage them to make purchase. ?? ?? ?? ?? 1 ...read more.