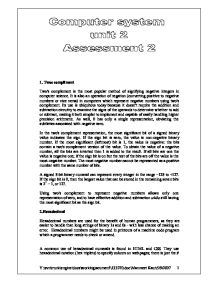 1. Twos compliment Two's complement is the most popular method of signifying negative integers in computer science. It is also an operation of negation (converting positive to negative numbers or vice versa) in computers which represent negative numbers using two's complement. Its use is ubiquitous today because it doesn't require the addition and subtraction circuitry to examine the signs of the operands to determine whether to add or subtract, making it both simpler to implement and capable of easily handling higher precision arithmetic. As well, 0 has only a single representation, obviating the subtleties associated with negative zero. In the two's complement representation, the most significant bit of a signed binary value indicates the sign. If the sign bit is zero, the value is non-negative binary number. If the most significant (leftmost) bit is 1, the value is negative: the bits contain a two's complement version of the value. To obtain the value of a negative number, all the bits are inverted then 1 is added to the result. If all bits are one the value is negative one; if the sign bit is on but the rest of the bits are off the value is the most-negative number. The most negative number cannot be represented as a positive number with the same number of bits. A signed 8-bit binary numeral can represent every integer in the range -128 to +127. ...read more.

Bits 48-57 represent the numeric digits. Bits 65-90 are the capital letters, while bits 97-122 are the lower-case letters. The rest of the bits are symbols of punctuation, mathematical symbols, and other symbols such as the pipe and tilde. ASCII began in theory as a simpler character set, using six rather than seven bits. Ultimately it was decided that the addition of lower-case letters, punctuation, and control characters would greatly enhance its usefulness. Not long after its adoption, much discussion arose about possible replacements and adaptations of ASCII to incorporate non-English and even non-Roman characters. As early as 1972 an ISO standard (646) was created in an attempt to allow a greater range of characters. A number of problems existed with ISO-646, however, leaving it by the wayside. The current leading contender for replacing ASCII is the Unicode character set. This standard allows for essentially unlimited characters to be mapped by using collections of bytes to represent a character, rather than a single byte. The first byte of all Unicode standards remains dedicated to the ASCII character set, however, to preserve backward compatibility. ASCII is now most often heard in the phrase ASCII art. This describes the use of the basic character set to create visual approximations of images 3c Bit Masks A bit mask makes use of the fact that binary numbers are made up of 1's and 0's, each digit in a binary number being equivalent to one bit. ...read more.