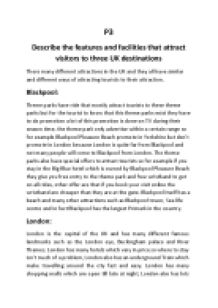 ﻿P3 Describe the features and facilities that attract visitors to three UK destinations There many different attractions in the UK and they all have similar and different ways of attracting tourists to their attraction. Blackpool: Theme parks have ride that mostly attract tourists to these theme parks but for the tourist to know that this theme parks exist they have to do promotion a lot of this promotion is done on TV during their season time, the theme park only advertise within a certain range so for example Blackpool Pleasure Beach promote in Yorkshire but don?t promote in London because London is quite far from Blackpool and not many people will come to Blackpool from London. ...read more.

Blackpool itself has a beach and many other attractions such as Blackpool tower, Sea life centre and in fact Blackpool has the largest Primark in the country. London: London is the capital of the UK and has many different famous landmarks such as the London eye, Buckingham palace and River Thames. London has many hotels which vary in price so where to stay isn?t much of a problem, London also has an underground Train which make travelling around the city fast and easy. London has many shopping malls which are open till late at night, London also has lots of famous nightclubs and places such as Oxford street and Piccadilly Circus are also open till late at night so things to do at night are not a problem. ...read more.