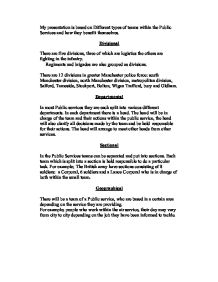 Different types of teams within the Public Services and how they benefit themselves.

My presentation is based on Different types of teams within the Public Services and how they benefit themselves. Divisional There are five divisions, three of which are logistics the others are fighting in the infantry. Regiments and brigades are also grouped as divisions. There are 12 divisions in greater Manchester police force: south Manchester division, north Manchester division, metropolitan division, Salford, Tameside, Stockport, Bolton, Wigan Trafford, bury and Oldham. Departmental In most Public services they are each split into various different departments. In each department there is a head. The head will be in charge of the team and their actions within the public service, the head will also clarify all decisions made by the team and be held responsible for their actions. The head will arrange to meet other heads from other services. Sectional In the Public Services teams can be separated and put into sections. Each team which is split into a section is held responsible to do a particular task. For example; The British army have sections consisting of 8 soldiers: a Corporal, 6 soldiers and a Lance Corporal who is in charge of both within the small team. ...read more.

Depending on the nation, military branch, mission, and organization, a modern combat regiment resembles a brigade, in that both range in size from a few hundred to 5,000 soldiers (3 to 7 standard battalions). Brigade A brigade is a military unit which is composed of two to five regiments or battalions. Usually, a brigade is a sub-component of a division, a larger unit consisting of two or more brigades; however, some brigades are classified as a separate brigade and operate independently from the traditional division structure. The typical standard brigade consists of approximately 4,000 to 5,000 troops. A brigade's commanding officer is commonly a brigadier general, brigadier or colonel. Force Force is a term used within the public services for a specific work type i.e. Police force. Which is now Police Service. Multi agency/Service Teams Multi agency is an action when different services come together to work together as a team to deal with a specific problem e.g. police and the NHS come together to fight alcohol abuse which links to anti social behaviour on the streets. ...read more.

People co-operating when something like a Major Incident happens is a help because it can get the job done quicker. Also it spreads the workload around, so individuals don't need to do so much work. Teams are a very effective way of implementing change Identification of development of talent Working in a team is a good way to get to know other people in the group you also, get to see each others strengths and weaknesses. At same time other team members discover the same about you this can then lead to discovering potential informally and talent This can lead to discovering of potential informally � Talent can also be discovered formally Types of team work activities Task centred- is when the team carry out a particular job in the most efficient way. Team centred- is based on the team bonding with each other and improve their skills on team work. These can also be divided into; Paper based exercises- is for the team to write down any possible problems, cost estimations and planning. Activity based exercises- Is team work to develop trust and co-operation it involves physical training. Work activities- are departments, sections, squads and crews etc. ...read more.