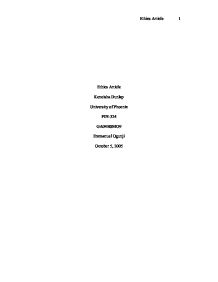 Ethical behavior is just as important as competence in the accounting and financial field.

Ethics Article Keneisha Dunlap University of Phoenix FIN-324 GA04BSMO9 Emmanuel Ogunji October 5, 2005 Financial Translations Four Corners article assist stakeholders with the understanding finance and financial statements, the four corners represent the four basics of financial statements. The first corner is the balance sheet, which is a statement of equity that includes assets, stockholders, and liabilities. The balance sheet must give an account of the total assets and total liabilities. The balance sheet is usually done quarterly or per fiscal year. The second corner is income statement. The income statement is reviews a company's revenues and expenses, they also project sales, expense, profit or loss. ...read more.

For example, depreciation has been implicitly included in fixed expenses, but it represents a non-cash accounting entry rather than an explicit expenditure of funds. To the extent that we were doing break-even analysis on a strictly cash basis, depreciation would be excluded from fixed expenses. While cash break-even analysis is helpful in analyzing the short-term outlook of the firm, particularly when it may be in trouble, break-even analysis is normally conducted on the basis of accounting flows rather than strictly cash flows. Within every organization someone's has to keep track of the money. At my previous organization that would be me, I was a director for an after school/ day camp programs. ...read more.

For example the organization had nine centers that operated whenever there was an event that all nine centers interacted together, all nine accounts were charged. This happen sometime knowingly, and sometimes directors were unaware until they received a receipt for expenses after the fact. Ethical behavior is just as important as competence (Williams, 2003). In the accounting, and financial field it is important of have honesty and a strong commitment to ethical behavior. As stated in the New York Times (2002), by "outlining inappropriate behavior in a code to avoid future problems can be a healthy response to an ethics problem. But if the code is 'inconsistent with the culture as employees perceive it, then it appears to be only window dressing and hypocritical. ...read more.