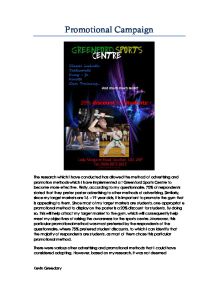 Evaluating the impact of my poster advert for Greenford Sports Centre.

Promotional Campaign The research which I have conducted has allowed the method of advertising and promotion methods which I have implemented at Greenford Sports Centre to become more effective. Firstly, according to my questionnaire, 70% of respondents stated that they prefer poster advertising to other methods of advertising. Similarly, since my target markets are 16 - 19 year olds, it is important to promote the gym that is appealing to them. Since most of my target markets are students, one appropriate promotional method to display on the poster is a 20% discount for students. By doing so, this will help attract my target market to the gym, which will consequently help meet my objectives of raising the awareness for the sports centre. Moreover, this particular promotional method was most preferred by the respondents of the questionnaire, where 75% preferred student discounts, to which I can identify that the majority of respondents are students, as most of them chose this particular promotional method. ...read more.

Another disadvantage is that an advertisement is sometimes placed alongside competing ads. For example, a car dealership might place an ad, but if another car dealership places an ad in a similar spot, those ads are competing for leads. In addition, it can be argued that two car dealership ads placed anywhere on one newspaper are competing in a small space. This is one of the major disadvantages of newspaper advertising; potential leads can be so easily attracted to similar advertisements. Depending on the newspaper layout, clutter can be another problem. Sometimes ads selling certain products are placed on one page or section of a newspaper. The viewer is bombarded with advertisers attempting to sell things and must carefully read the paper to find what he or she is looking for. ...read more.

However, if you miss details in a radio advertisement, there's no way to pause or rewind; instead, the listener must wait until the ad played again. To radio listeners, advertisements can appear as nothing more than a disruption to the entertainment. This means that listeners may adopt the habit of tuning out during the advertisement period. They may cease to pay attention or might even change the station until the commercial break has passed. Also, the majority of people will listen to the radio in the car during their commute to work. This means that as they are concentrating on driving, radio advertisements can often pass by unnoticed. The poster was designed primarily to be located across the gym and some parts of the school. As the poster is a standard A4 design, multiple copies would need to be produced in order to attract as many students as possible. ?? ?? ?? ?? Kevin Greedary ...read more.