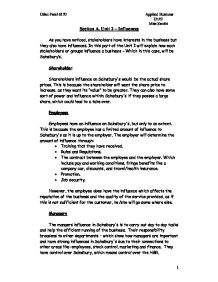 explain how each stakeholders or groups influence a business - Which in this case, will be Sainsburys.

Section A, Unit 2 - Influences As you have noticed, stakeholders have interests in the business but they also have influences. In this part of the Unit I will explain how each stakeholders or groups influence a business - Which in this case, will be Sainsbury's. Shareholder Shareholders influence on Sainsbury's would be the actual share prices. This is because the shareholder will want the share price to increase, as they want its "value" to be greater. They can also have some sort of power and influence within Sainsbury's if they posses a large share, which could lead to a take over. Employees Employees have an influence on Sainsbury's, but only to an extent. This is because the employee has a limited amount of influence to Sainsbury's as it is up to the employer. The employer will determine the amount of influence through: * Training that they have received. * Rules and Regulations. * The contract between the employee and the employer. Which include pay and working conditions, fringe benefits like a company car, discounts, and travel/health insurance. ...read more.

Consequently Sainsbury's can afford to sell them at cheap prices and gain more business and the suppliers will get more interest and business (distribution) between them. Customers Have the influence that can change the type of products Sainsbury's sell. E.g certain stores may sell more of one brand of product than the others, causing others to be taken off the shelves or changed by the manufacturers to suit the demand and interests of customers in Sainsbury's. They also suggest new ideas for the stores and the products which can influence how Sainsbury's operates. Local Community Have the influence which can decide where a new store should be located - close to residents/ proximity to the market. The employment rates in the surrounding area can effect if the store can employ enough workers or if there are too many applicants. The community also poses slight pressure for more environmental consideration like litter of plastic bags and excess packaging and congestion, which has an indirect affect to where the car park, should be situated for the store. ...read more.

"Fair trade" on the other hand wants to deal with ethical issues about farmer's equal pay. This can influence the customers of Sainsbury's, as customers may feel more satisfied and pleased with Sainsbury's, and the fair trade product they have purchased. Overall the pressure group influences Sainsbury's because they can make customers see Sainsbury's in a different perspective eg. they could have a campaign showing how much waste Sainsbury's produces each year which can put some customers off and therefore gain bad publicity if pressure groups aren't dealt with by Sainsbury's. Government Influence Government will influence Sainsbury's financially as the economy is changing and the government would want Sainsbury's to stay in business and serve the public (customers). They also influence the productions and sale of goods, as the government would want healthier food options as a new initiative towards obesity in Britain. They also regulate other small businesses to give them a chance and a say in the local communities to stop people all going to large supermarkets like Sainsbury's. ?? ?? ?? ?? Dilan Patel 6170 Applied Business Unit2 Miss Sambi 1 ...read more.

In summary, the report is quite good. The report states a number of stakeholders, and writes a little about each one. However the sections 'Shareholders', 'Suppliers' and 'Customers' are lacking detail. These three sections are the vital areas which have ...

In summary, the report is quite good. The report states a number of stakeholders, and writes a little about each one. However the sections 'Shareholders', 'Suppliers' and 'Customers' are lacking detail. These three sections are the vital areas which have large influence over the business, however these sections are too vague. The section 'Shareholder' should be the largest of all other sections, as shareholder's own the business. The owners of any business have the control on how the business operates within the near future above all other stakeholders. There are a number of methods which shareholders would be able to control the company. The most common of which is a meeting known as 'AGM' (Annual General Meeting), whereby all major shareholders will visit the office and discuss the business going forward. The meeting will contain all senior employees, including the CEO and the shareholders will suggest a number of steps to be undertaken. The sections 'Local Community', 'Pressure Groups' and 'Government' do not have a major role within Sainsbury's, and I feel that the student has covered these areas more than some of the other major areas such as Shareholders, Suppliers and Customers. These areas should have been covered in more detail.

The student has created the section 'employees', and further down the report states 'Managers', which is slightly odd. Mangers are employees of the company. These two sections should be combined together. It's strange that the student didn't asses this, and noticed that there are the same thing. The section 'Suppliers' lacks in-depth understanding. I believe that the bottom line is that if the store doesn't have any products in, the business will beocme bankrupt. Suppliers are able to refuse business with Sainsbury's, and it's vital that the relationship between the two are strong and reasonable. It's usually a give and take relationship, as the supermarket may want a lower price, although the supplier may want extra advertising within the store for the lower price. The relationship is key for the retailer and there have a large amount of influence. The section 'Customers' is another vital influence. As the bottom line, is the sales numbers. If one product isn't selling, this should be removed from the supermarkets and replaced by a product which consumers demand from the store. Failure to keep 'in touch' with the consumer can result in loss of income. Consumer's often select their best brands/products, which results in consumer have major influence over the products that are within the store.