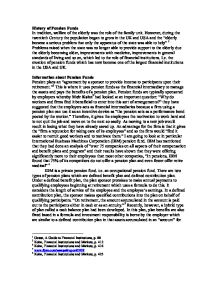 History of Pension Funds In tradition, welfare of the elderly was the role of the family unit. However, during the twentieth Century the population began to grow in the UK and USA and the "elderly became a serious problem that only the apparatus of the state was able to help" 1 Problems raised when the state was no longer able to provide support to the elderly due the elderly becoming older, improvements with medicine, improvements in general standards of living and so on, which led to the role of financial institutions. I.e. the creation of pension funds which has now become one of the largest financial institutions in the USA and UK. Information about Pension Funds Pension plans an "agreement by a sponsor to provide income to participants upon their retirement."2 This is where it uses pension funds as the financial intermediary to manage the assets and pays the benefits of a pension plan. Pension funds are typically sponsored by employers whereby Meir Kohn3 had looked at an important question: "Why do workers and firms find it beneficial to enter into this sort of arrangements?" they have suggested that the employers acts as financial intermediaries because a firm using a pension plan can use it as an incentive device as "the pension acts as a performance bond posted by the worker." Therefore, it gives the employees the motivation to work hard and to not quit the job and move on to the next so easily. ...read more.

Pooling is also a risk reducing technique where it provides a better trade-off of risk for small investors than for direct holdings. The manager of pension funds can "collect the income from a large number of small savers and then distribute it among a much wider variety of securities than an individual saver could possibly do." 10 Function 2: Maturity Transformation Maturity transformation is defined as "the conversion of funds lent for a short period into loans of longer duration." Pension fund creates more attractive assets and liabilities, by mostly maturity transformation. They deal with maturity transformation by investing the long term funds into the stock market because of the large pool of funds, when employees retire; liquidity would be available to them. All this can be done, is due to the fact of economies of scale. Function 3: Transaction Costs Pension funds do not function in exchanging goods, services, assets directly and it also does not offer liquid liabilities. However, it still has an indirect role in boosting the efficiency of the financial systems, by influencing the structure of securities markets. Pension Funds help to generate liquidity by their own activity on arbitrage, trading and diversification and from the fact that liquidity is a form of increasing return to scale, as larger markets in which pension funds are active attractive more trading, reducing costs and improving liquidity further.11 http://www.bbk.ac.ik also mentions other functions in which pension funds act as financial intermediaries. ...read more.

Mr. Joyce has also pointed out advantages due to this strategy taken place, which is "not only is this the best interests of our retirees and employees, but shareholders also benefit because by stepping up to funding gap now, we decrease uncertainty about the future. Another advantage of this move made by the IBM is that not only will it solve the problem of the IBM's pension fund deficit, but also "it would not affect operating budgets or strategic initiatives." Mr. Joyce went on to mention that they have other plans to invest in such as "5 billion in research and planning, $5 billion in capital expenditures and so on." Things would seem to look up as their expectations for earnings per share in 2003 would not change unlike their previous plan. Finally, in December 2002 IBM had "restored the company's US pension plan to fully funded status"21showing the company has not only be one of the first to announce a strategy to deal with the problem but also to be successful in their solution within the time they planned (by year end). They succeed in fully funding the pension fund by contributing "totals approximately $3.95 billion, $2.09 billion or 52.9% in cash with remaining $1.86 billion or 47.1% pension fund with 24,037,354 shares of IBM stock. Its success also relies on the "performance of capital markets, which decreased the value of the pension plan's assets in the intervening weeks."22 By looking back at the both of the charts23, it shows that the price performance had increased during the year 2003. ...read more.