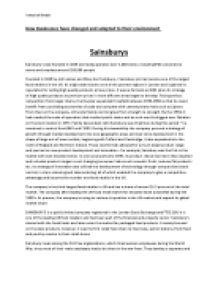 How Sainsburys have adapted to their business environment

﻿Irshad shiliwala How Businesses have changed and adapted to their environment Sainsburys Sainsbury?s was founded in 1869 and today operates over 1,000 stores, including 440 convenience stores and employs around 150,000 people. Founded in 1869 by John James and Mary Ann Sainsbury, J Sainsbury plc has become one of the largest food retailers in the UK. Its origins date back to one of the poorest regions in London and it gained its reputation for selling high quality products at low prices. It was as far back as 1882 when its strategy of high quality products at premium prices in more affluent areas began to develop. Facing serious competition from larger chains, the founder expanded threefold between 1890-1900 so that he could benefit from purchasing economies of scale and compete with contemporary rivals such as Liptons. From then on the company, still under family control grew from strength to strength. By the 1970s it had reached the scale of operation that merited public status and as such was the biggest ever flotation on the stock market in 1973. Family descendant John Sainsbury was Chairman during this period ? he remained in control from1969 until 1992. During his stewardship the company pursued a strategy of growth through market development into new geographic areas and new store development in the shape of large out of town outlets, beginning with Telford and Cambridge. It also expanded into the north of England and Northern Ireland. These new formats allowed for a much larger product range and spurred on new product development and innovation - for example, Sainsbury was the first in the market with own branded wines. ...read more.

It introduced in internet shopping for the customers that help in growing the business and building up its brand image among its customers. During 1980's and 1990's it went through couple of successful takeovers including that of William low, a Dundee based firm competing with Sainsbury. In 1997, Tesco also went into a business alliance with esso in order to get a lease of its several petrol filling stations. In July 2001 Tesco became involved in Internet grocery retailing in the USA when it obtained a 35% stake in GroceryWorks.In 2002 Tesco purchased 13 HIT hypermarkets in Poland. It also made a major move into the UK convenience store market with its purchase of T & S Stores, the owner of 870 convenience stores in theOne Stop, Dillons and Day & Nite chains. Tesco and Sainsbury growth structure mainly differs. Tesco has mainly focused on the growth through takeovers, acquisitions and mergers on the other hand; Sainsbury's growth was mainly based on organic growth. Growth through takeovers, acquisitions and mergers has helped Tesco to gain better and more market knowledge, technological knowledge and management knowledge. Whereas, organic growth for Sainsbury's has taken through a longer period of time, it can be concluded that Tesco and Sainsbury's have some structural similarity. On the lines of structural strategy, it can be concluded that Tesco follows a more diversified activities by using several variants like, Express, Metro, superstore, Extra and Homeplus which helps them to reach larger number of customers with different kinds of variants. it can be said Sainbury's has several strategical differences with its leading market leaders Tesco and Asda, however, it has started working on its set back and is currently responding to the organisational and social needs in a better way. ...read more.

Family descendant John Sainsbury was Chairman during this period ? he remained in control from1969 until 1992. During his stewardship the company pursued a strategy of growth through market development into new geographic areas and new store development in the shape of large out of town outlets, beginning with Telford and Cambridge. It also expanded into the north of England and Northern Ireland. These new formats allowed for a much larger product range and spurred on new product development and innovation - for example, Sainsbury was the first in the market with own branded wines. In a ten year period to 1994, its product choice had more than doubled and included product ranges to suit changing consumer tastes such as exotic fruits, reduced fat products etc. Its strategy of innovation also utilised the development of technology through computerised stock control, in store scanning and sales ordering, all of which enabled the company to gain a competitive advantage and become the number one food retailer in the UK. If Sainsburys had not changed and adapted along with its competitors like Tescos, Asda etc the supermarket would have fallen by the way side and possibly gone out of business, due to technological advances all business have to keep up with modern technology or risk losing their customers. In the modern shopping era customers want to consume large and fast and internet retail has enabled this. Sainsburys has been very successful in implementing changes and adapting to its environments and customer needs, Sainsburys has innovated and adopted new business ideas in keeping up with their competitors, today it has Sainsburys stores, sainsburys entertainment, sainsburys energy, finance and property to name a few. April 2012 saw the launch of Mp3 music downloads, which marked the start of an exciting journey for Sainsbury?s which continues through eBooks and digital video in the coming months. ...read more.