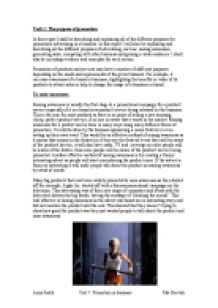 ﻿Task 1: The purpose of promotion In this report I shall be describing and explaining all of the different purposes for promotion/ advertising in a business. In this report I will also be explaining and describing all the different purposes of advertising, such as: raising awareness, generating sales, competing with other business and gaining a wider audience. I shall also be including evidence and examples for each section. Promotion of products and services may have a number of different purposes depending on the needs and requirements of the given business. For example, it can raise awareness of a brand or business, highlighting the benefits or value of its products to attract sales or help to change the image of a business or brand. To raise awareness Raising awareness is usually the first stage to a promotional campaign for a product/ service especially if it is a brand new product/ service being released by the business. This is the case for most products as there is no point of selling a new amazing, cheap, perfect product/ service, if no one is aware that it exists in the market. Raising awareness for a product can be done in many ways using many different forms of promotion. It could be done by the business sponsoring a music festival or even setting up their own event. This would be an effective method of raising awareness as it means that anyone in the festival or if they see the festival/ event they will be aware of the product/ service, it ...read more.

For example 'Currys' has a larger market share then 'Appliance world' therefore more people are likely to buy from 'Currys' then from 'Appliance world'. This is healthy for all business and computers as people in the company will try harder just to try and beat the other company in the same market. Another example is two companies that might compete are Coca Cola and Pepsi co. They will try to compete as they sell similar drinks and there are limited customers so they will both want to try and get most of them. Another example is that the military service adverts, such as the RAF advert and the army adverts, compete to get the most people to join their service. They do this effectively but advertising their service as being the best to join, for example the RAF may claim that the pay in the RAF is better than the pay in the army. Whereas the army may claim that if you join the army you would learn more skills then you would in the navy. To gain a wider audience Business will often advertise to gain a wider audience, as if they have a wider audience then often the amount of sales will increase as there are more possible customers. This is as if they increase the amount of sales, they will gain a larger profit and making profit is most business? aims, this means that they will be successful. ...read more.

Another issue of attention spawn on the television is that they show nine or ten adverts within a period of 5 minutes, so by the time the last one has finished showing most people have already forgotten the first one. Another issue with television advertising is that after watching adverts for two minutes or so the audience will get bored or start doing something and miss the last adverts. Existing perception Existing perceptions is a major issue when it comes to using famous celebrities to advertise your product, as some people may dislike the person you use so they will be repelled from the product. This will mean using the celebrity will be ineffective as not as many people as you hoped will be attracted to the product. For example Justin Beibar is a celebrity that many people like but there are also a lot of people that dislike him, therefore if a company uses him to advertise their product it will repel a lot of people from their product. Distortion Distortion is when the advert is broken or not working fully, this is not the fault of the audience of the advertisers it is the issue of the technology that is used to advertise the product. For example if you are advertising on the internet the internet speed may not be fast enough so not all of the advert is shown. Amin Sadik Unit 7: Promotion in business Mrs Dervish ...read more.