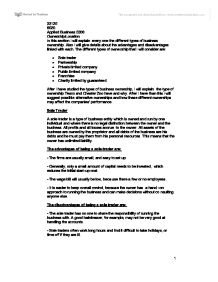 In this section I will explain every one the different types of business ownership. Also I will give details about the advantages and disadvantages linked with each.

In this section I will explain every one the different types of business ownership. Also I will give details about the advantages and disadvantages linked with each. The different types of ownership that I will consider are: * Sole trader * Partnership * Private limited company * Public limited company * Franchise * Charity limited by guaranteed After I have studied the types of business ownership, I will explain the type of ownership Tesco and Chester Zoo have and why. After I have than this I will suggest possible alternative ownerships and how these different ownerships may affect the companies' performance. Sole Trader A sole trader is a type of business entity which is owned and run by one individual and where there is no legal distinction between the owner and the business. All profits and all losses accrue to the owner. All assets of the business are owned by the proprietor and all debts of the business are his debts and he must pay them from his personal resources. This means that the owner has unlimited liability. The advantages of being a sole trader are: - The firms are usually small, and easy to set up. - Generally, only a small amount of capital needs to be invested, which reduces the initial start-up cost. - The wage bill will usually be low, because there a few or no employees. - It is easier to keep overall control, because the owner has a hand -on approach to running the business and can make decisions without consulting anyone else. The disadvantages of being a sole trader are: - The sole trader has no one to share the responsibility of running the business with. A good hairdresser, for example, may not be very good at handling the accounts. - Sole traders often work long hours and find it difficult to take holidays, or time off if they are ill. ...read more.

The money that they would borrow would have to be paid back with heavy interest. This would mean that Tesco would not be able to spend the money as freely as they can with the money from their shareholders. Also Tesco might not be able to borrow money because of the current credit crunch as the top banks are reluctant to give money out to anybody as Britain and many other countries in the world are struggling during the recent financial crisis. There is another advantage to Tesco being a plc and that is their have the board of directors. They all have individual areas of expertise and can offer a wide range of skill and knowledge. Tesco has the ability to raise larger sums of money through expanding the number of shares in order to take over other businesses. Since Tesco is a Public Limited Company they will have credibility from the public, they will have good prestige and respect from several people and loads of people will want to invest in Tesco. Tesco being a Public Limited Company means that they have purchasing power and can put on pressure on their suppliers. Being able to do this will mean that they are able to drive down many prices so that they can easily sell merchandises and receive a large amount of profit. For example Tesco could go to a bakery and ask for 10 loaves of bread and receive them for �5 whereas a sole trader would visit and would have to pay a lot more than the Public Limited Company and would have to raise their prices so they could make a profit. I will now explain why it would be difficult for Tesco to now become a Sole Trader or Partnership. Tesco could certainly not be a Sole Trader or Partnership because they would not have as many shareholders as they would have unlimited liability. ...read more.

Also limited amounts of capital can be raised. Shares cannot be sold to the public if money was needed quickly because if Chester Zoo were a business and were to make good profits than the current shareholders won't want to sell their shares, this may lead to disruptions and would-be shareholders who would like to invest in the zoo will stop hoping. And when investors are needed for Chester Zoo there won't be any available. Furthermore if Chester Zoo were to be a business shareholders will first have to all agree for a share to be sold otherwise it cannot happen, for example if most of the shareholders at Chester Zoo didn't want one shareholder to be at the zoo, everyone else will have to agree, if they don't the shareholder will still stay. If Chester Zoo had in excess of 100 shareholders it would be very easy for the business to lose control, communication might be sent wrong which may lead to mayhem. As well as easy to lose control of the business, Chester Zoo can be taken over by bids from members of the public; members already at the zoo might not like the fact that an ordinary man or women will become a shareholder in such a massive business. In addition to that people (investors) might not be interested in buying shares as the zoo would be more interested in the welfare of the animals rather that the welfare of the shareholders. For example Chester Zoos Mission Statement is "The role of the Zoo is to support and promote conservation by breeding threatened species, by excellent animal welfare, high quality public service, recreation, education and science" This statement doesn't say anything about the welfare of shareholders. This may prevent investors from investing into the business as they may assume that they are not part of the Chester Zoo family. ?? ?? ?? ?? 33125 6020 Applied Business 5306 Ownership/Location 1 ...read more.