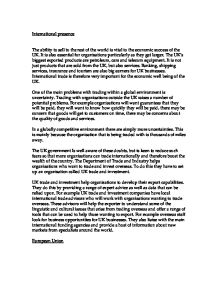 International presence The ability to sell to the rest of the world is vital to the economic success of the UK. It is also essential for organisations particularly as they get larger. The UK's biggest exported products are petroleum, cars and telecom equipment. It is not just products that are sold from the UK, but also services. Banking, shipping services, insurance and tourism are also big earners for UK businesses. International trade is therefore very important for the economic well being of the UK. One of the main problems with trading within a global environment is uncertainty. Trading with organisations outside the UK raises a number of potential problems. For example organisations will want guarantees that they will be paid, they will want to know how quickly they will be paid, there may be concern that goods will get to customers on time, there may be concerns about the quality of goods and services. In a globally competitive environment there are simply more uncertainties. This is mainly because the organisation that is being traded with is thousands of miles away. The UK government Is well aware of these doubts, but is keen to reduce such fears so that more organisations can trade internationally and therefore boost the wealth of the country. The Department of Trade and Industry helps organisations who want to trade and invest overseas. To do this they have to set up an organisation called UK trade and investment. UK trade and investment help organisations to develop their export capabilities. They do this by providing a range of expert advice as well as data that can be relied upon. For example UK trade and investment companies have local international trade advisors who will work with organisations wanting to trade overseas. These advisors will help the exporter to understand some of the linguistic and cultural issues that arise from trading overseas and offer a range of tools that can be used to help those wanting to export. ...read more.

As such, it has become closely associated with globalisation. The WTO is the only international agency overseeing the rules of international trade. It polices free trade agreements, settles trade disputes between governments and organises trade negotiations. WTO decisions are absolute and every member must abide by its rulings. So, when the US and the European Union are in dispute over bananas or beef, it is the WTO which acts as judge and jury. WTO members are empowered by the organisation to enforce its decisions by imposing trade sanctions against countries that have breached the rules. The general agreement on tariffs and trade was the predecessor of the world trade organisation. The general agreement of trade and tariffs was formally set up in 1947 to operate on three levels 1. to create set of trading rules. 2. as an international agency for helping to resolve trade disputes 3. as a means for countries to get together to create freer trade and to cut down existing barriers. The WTO was formed in 1994 to replace the GATT treaty under the Uruguay round of talks. The countries who signed into GATT agreed to go through a series of agreements called a round creating agreements to reduce certain tariffs. There have been nine trade negotiation rounds under GATT, one of which is still going on. The world trade organisation has agreements in the following areas Goods - this is where all of the trade agreements started. GATT was the forum where lower customs duties rates were negotiated as well as other barriers to trade across a whole range of areas from agriculture to textiles. Services. - Banks, hotel chains, insurance firms and all other businesses who provide services are able to enjoy the same principles of free trade as those who trade in goods. Intellectual property.- These are rules and agreements related to trade in ideas and creativity. ...read more.

They will spend �200M over the next five years to implement their 100-point plan which includes making the supermarket carbon neutral and sending no waste to landfills by 2012. Already at the forefront, last year the top executives saw the film "An Inconvenient Truth" and Stuart Rose, the Chief Executive said "We believe a responsible business can be a profitable business. We are calling this "Plan A" because there is no 'plan B'." The plan covers five areas, including fair trade --offering more Fairtrade products and making 20M garments a year out of Fairtrade cotton (an extension of their existing commitment). They will reduce their use of packaging by 25% and use packaging materials from sustainable or recycled sources. Already cut back, it will now become fully degradable, using cornstarch derived plastic. Stores will also test composters which will produce biogas from out of date food and other waste. The retailer will buy as much food from the UK and Ireland as possible; doubling the amount with the next twelve months. Interestingly, they will decrease the amount of food flown in and label imported food as 'flown'. Another danger for international trade is protectionism. There is a danger that countries will take on protectionist policies which are designed to support their own services and their own products. Protectionism distorts international markets and stops countries from enjoying some of the benefits of international trade. When countries adopt protectionism there is a danger that foreign governments may retaliate which could cause a war over trade. There are some people who argue and say that the west uses double standards when they trade with less economically developed countries. Protectionism is the economic policy of restraining trade between nations, through methods such as tariffs on imported goods, restrictive quotas, a variety of restrictive government regulations designed to discourage imports, and anti-dumping laws in an attempt to protect domestic industries in a particular nation from foreign take-over or competition. This is closely aligned with anti-globalisation, and contrasts with free trade, where no artificial barriers to entry are instituted. ?? ?? ?? ?? ...read more.