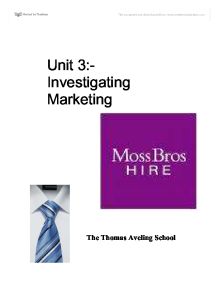 Unit 3:- Investigating Marketing The Thomas Aveling School Introduction I have decided to focus this unit on the company Moss Bros Hire; because the suit hire business has been at the forefront of menswear throughout the decades and even today is well known nationwide. Moss Bros Group PLC has over 150 retail outlets nationwide, separated into two divisions Mainstream and Fashion. The Mainstream division has over 116 stores including: - Moss, Moss Bros, Moss Bros Hire, Savoy Taylors Guild and Factory outlets. The Fashion division has 35 stores including: - Cecil Gee, Hugo Boss, Canali, Simon Carter and Beale & Inman. The founder of the company Moses Moses opens the first two shops in London Covent Garden during 1851. Moses, a dealer in quality second hand clothes could hardly have guessed the impact his enterprise would have on the future of menswear as he laid the foundations of the current Moss Bros Group. Moses dies in 1894, leaving the business to two of his five sons, Alfred and George who carried on their father's establishment which within five years the Moss Bros shop was rebuilt and opened. Each of the brothers had their own strengths, which helped the organization of Moss Bros to grow. George had the brains, Alfred a talented clothes buyer, while the third brother Lewis was a persuasive salesman even though he was not a partner of Moss Bros. The business took up on success until 1897; Alfred offered to help a friend which has great significant and beneficial effect on the company. Charles Pond, a talented amateur actor who had fallen on hard times and was no longer had fine clothes necessary for these occasions. So he took his problems to Alfred, who lent him smart outfits. In time Pond took this for granted causing Alfred to exclaim: "it's about time you paid something for these clothes," and a fee of seven and sixpence (37.5p) ...read more.

Some products may become less popular as income rise. The customer who once was happy to rent accommodation, wear scruffy clothes and rive a second-hand may switch to buying a house, designer clothes and driving a status symbol car when his/her income has increased. They can afford expensive things as they are getting paid more. Age Distribution: - Different products appeal to different age groups some more than others. Business needs to be keenly aware of the changes taking place in the numbers in different age segments so as to know where the best opportunities lie. Demographic segmentation Demographic segmentation may involve dividing the population into discrete segments such as age, gender, income and lifestyle. For example, by age for clothing retailing, by s*x for cosmetics, by family size for different sized packages of breakfast cereals. Demographic variables can be closely related to consumer's needs and why they actually purchase them certain items on their behaviour. This helps producers to target their products more effectively. Some categories of psychographic factors used in market segmentation include social class, lifestyle, behaviour, opinions, vales and personality charactistics. Lifestyle is broken down by the activities the consumer enjoys, their interests and the customer's opinions. Yuppie is the lifestyle in which the customer's lives as in high valued house/flat, good salary and expensive or not expensive items. Homogenous groups which is when the market is divided into groups similar to meet their wants and needs. For example Moss Bros Hire do this by having different styles of suits to be aimed all their consumers. This allows i.e. Royal Ascot to not only be worn by an older man but a young trendy student. Personality charactistics are the different personalities in which the goods and services are aimed at. Moss Bros Hire segment on lifestyle and behaviour by producing clothing that is appropriate to suit certain age groups. This is so customers from different age's expectations are met, as everyone has various styles and occasions to meet. ...read more.

Holding stocks are expensive as many businesses try to use a cheaper way of (JIT), which is a just-in-time system. The problems that will affect this are delays that arise leading to which results to loss in sales and the dependant upon suppliers. Therefore many businesses would request stock on i.e. 2day delivery. Transporting products can be done in various options such as road, rail, sea and air. Businesses would decide what is the cheapest way of saving money but getting the products over. Moss Bros hire transport their products over by over seas from different countries. Moss Bros hire gets their suits made from different countries such as European countries and Asia. Canali is a growing Italian clothing company which is situated in Sovico, about half an hour from Milano. Canali has seven centres of productions located in Italy which are all connected with his headquarters at Sovico. Each garment is tailored to be made and 100 produced in Italy. Cecil Gee began importing in the Italian made suits made from lightweight, more comfortable and more versatile fabrics. The success of that suit helped Cecil Gee began its own expansion opening new stores including a store on Kings Road and adding such noted men's clothing stores as Savoy Taylors Guild and Beale and Inman leading to merger of Moss Bros and Cecil Gee. With its growth in the use and access to the internet a lot more people are purchasing goods and services online. Moss Bros Hire also places it self on the internet to allow the consumers who can not get within the store to shop over the internet. This is good however it does not show detailed understanding and knowledge. You need to include different channels of distribution even if it does not relate to moss bros you need to be able to explain what place means and where it fits into the marketing mix. This section meets most of mark band one and some of mark band two in order to meet all of mark band one and two you need to make the improvements suggested. ...read more.