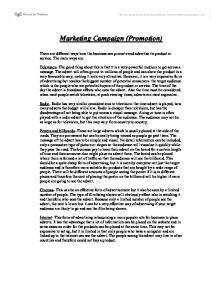 Marketing Campaign (Promotion) There are different ways how the business can promote and advertise its product or service. The main ways are: Television- The good thing about this is that it is a very powerful medium to get across a message. The advert will often go out to millions of people and can show the product in a very favourable way, making it look very attractive. However, it is a very expensive form of advertising but reaches the biggest number of potential consumers- the target audience which is the people who are potential buyers of the product or service. The time of the day the advert is broadcast affects who sees the advert. Also the time must be considered when most people watch television, at peak viewing times, adverts are most expensive. Radio- Radio has very similar considerations to television: the time advert is played, how many adverts the budget will allow. ...read more.

The board can be placed where there is formed a lot of traffic so that the audience will see the billboard. This should be a quite cheap form of advertising, but it is seen by everyone not just the target audience and is therefore more suitable for products that are bought by a wide range of people. There will be different amounts of people seeing the poster if it is in different places and therefore the cost of placing the poster on the billboard will be higher if more people are going to see the advert. Cinemas- This can be an effective form of advertisement but it also be seen by a limited number of people. The type of film being shown will obviously affect who is watching it and therefore who sees the advert. Because only a limited number of people see the advert, the cost is lower but it can be a very effective way of advertising if your target audience are likely to go and see the film being shown. ...read more.

The leaflets can be given to anyone in the street and therefore many of the leaflets will not be read, so I wouldn't use this method. Form my business, the leaflets will be delivered to people's homes in the local area, and also it can be targeted at particular neighbourhoods. For example, if the leaflets were advertising a local expensive restaurant, leaflets could be delivered or sent to an area where houses are expensive to buy. It is likely that more wealthy people live in these areas. The other reason is that leaflets have the advantage of being permanent and can be kept for a future reference; this is especially useful if a promotional offer is put on the bottom of the leaflet which offers money off the product or service. I have decided that the leaflet will cost 5p so if I need to produce 200 leaflets the cost of it will be �10.00 and I'll deliver the leaflets to houses in local area. ...read more.