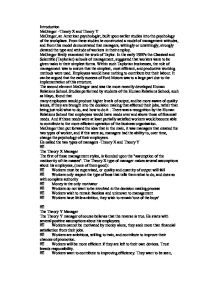 Introduction McGregor -Theory X and Theory Y McGregor, an American psychologist, built upon earlier studies into the psychology of the workplace. From these studies he constructed a model of management attitudes, and from this model demonstrated that managers, wittingly or unwittingly, strongly dictated the type and attitude of workers in their employ. McGregor firstly examined the work of Taylor. In the early 1900's the Classical and Scientific (Taylorian) schools of management, suggested that workers were to be given tasks in their simplest forms. Within such Taylorian businesses, the role of management was to ensure that the simplest, most efficient, and productive working methods were used. Employees would have nothing to contribute but their labour. It can be argued that the early success of Ford Motors was to a large part due to the implementation of this structure. The second element McGregor used was the more recently developed Human Relations School. Studies performed by students of the Human Relations School, such as Mayo, found that many employees would produce higher levels of output, and be more aware of quality issues, if they are brought into the decision making that affected their jobs, rather than being just told what to do, and how to do it . ...read more.

? Workers are ambitious, willing to train, and contribute to improve their chances of promotion. ? Workers will be more efficient if they are left to their own devices. Trust breeds responsibility. ? Workers want to contribute to improving efficiency. They want to be seen, noticed, rewarded and appreciated when they work well. ? The impact of Theory X and Theory Y managers on Businesses. If managers behave in the ways indicated above, there must be many company wide implications for all hierarchically structured businesses (i.e. all medium to large businesses). The main areas of impact will be in: ? The use of job enrichment and enlargement ? Empowerment ? Delegation and methods of communication ? Hierarchical structure To use a quote from McGregor "The theoretical assumptions management hold about controlling its human resources, determine the whole character of the enterprise." ? Consequences of Theory Y Managers The above quote indicates that Theory Y managers are likely to create an open structure, with both formal and informal paths of communication, and delegated powers. ...read more.

It also follows from this, that lack of motivation amongst workers and poor quality of output, is a management created problem. It is the role of management to create methods of production and management of Human Resources that will allow these resources to realise their full potential. It is of course quite possible that some organisations might benefit from the Theory X manager, after all it is sometimes necessary to gain control, especially when previous management have let organisations become unwieldy or uncoordinated. It can therefore be seen that for most businesses especially those wishing to use the latest production and motivational methods, the Theory Y manager is appropriate. But there can be cases where a dose of Theory X is exactly what a business needs. ? Exam Themes Is there any justification to the views expressed by Theory X managers? Can workers who were previously treated as Theory X type workers, be motivated to contribute fully to a business? What structures need to be in place within a business, to allow Theory Y managers to get the best out of their workers? ...read more.

*****
This essay is an excellent summary of theories of motivation. They explain the points well and analyse the information to explain causes and consequences to a high standard.