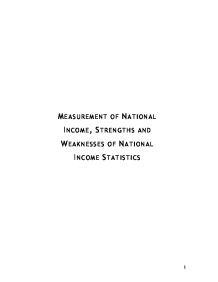 MEASUREMENT OF NATIONAL INCOME, STRENGTHS AND WEAKNESSES OF NATIONAL INCOME STATISTICS Introduction National income is defined as the sum of the incomes accruing to factors of production supplied by normal residents of the given country before deduction of taxes Measures of national income and output are used in economics to estimate the value of goods and services produced in an economy. They use a system of national accounts or national accounting developed by Simon Kuznets in the 1960s. Some of the more common measures are Gross National Product (GNP), Gross Domestic Product (GDP), Net National Product (NNP), and Net National Income (NNI) Analysis Circular Flow of Income The figure below divides the economy into two sections or sectors made up of households and firms. [Source]1 There are two types of flow (an amount per time period) between these groups: A real flow. Households own factor services which they hire out to firms. Factor services are then used to manufacture goods and services. A money flow. Households receive payments for their services (income) and use this money to buy the output of firms (consumption). ...read more.

GNP is a better when analysing sources and uses of income. In actual fact, there will be minor differences in the results obtained from the various methods due to changes in inventory levels. This is because goods in inventory have been produced (and therefore included in GDP), but not yet sold (and therefore not yet included in GNE). Similar timing issues can also cause a slight descrepency between the value of goods produced (GDP) and the payments to the factors that produced the goods (particularly if inputs are purchased on credit). The Difference between GDP and GNP Gross National Product (GNP) measures the final value of output or expenditure by UK owned factors of production whether they are located in the UK or overseas. GDP is only concerned with incomes generated within the geographical boundaries of the country. So output produced by Nissan in the UK counts towards our GDP but some of the profits made by Nissan here are sent back to Japan - adding to their GNP. GNP = GDP + Net property income from abroad (NPIA) The following table shows the various techniques used to measure national income: Table: 1 Approaches for Measuring National Income [Source]5 Expenditure Method (Aggregate Demand) ...read more.